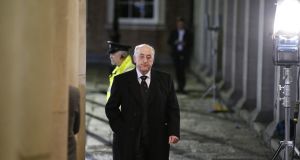 The IAASA has lodged an action against auditors CPA Ireland, which will come before Justice Peter Kelly on May 20th. Photograph: Nick Bradshaw for The Irish Times

An audit by the HSE’s internal team uncovered “considerable extravagance” at the charity, and a former director of the organisation was jailed in 2016 after a Dublin court heard that she stole more than €116,000 from Positive Action.

Positive Action was set up in the 1990s to provide support for women who became infected with hepatitis C after receiving infected blood products supplied by the State.

The auditors, Cronin & Company, successfully defended themselves against a regulatory investigation by the Institute of Certified Public Accountants in Ireland (CPA Ireland) in 2016.

The health service first made a complaint about the company’s statutory auditors after the HSE audit identified “significant deficiencies in the statutory audit”.

However, CPA Ireland found that a case of misconduct had not been made out by the HSE. This finding was challenged by the HSE, but an independent reviewer did not proceed any further with the matter.

However, it is understood that the HSE brought another complaint to the Irish Auditing and Accounting Supervisory Authority (IAASA), this time raising concerns about the CPA Ireland regulatory examination.

The IAASA is understood to have found in favour of the HSE in this process, and CPA Ireland is now set to undertake a second review. The organisation, however, cannot investigate for a second time under its bylaws unless it is on foot of a High Court order.

Such an order may be forthcoming shortly, however, as the IAASA has lodged an action against CPA Ireland. The action is thought to be largely procedural, with CPA Ireland likely to consent to the order being granted. However, it is understood to be among the first times such an action has been brought before the court, and much will depend on how it is received by Justice Peter Kelly when it comes before him on May 20th.

However, the HSE later found that proper financial records were not maintained and its audit revealed lavish spending by some involved in the charity. This included €325,000 on weekends away in Ireland, €104,000 on overseas trips and €87,000 on “restaurants, take-outs and groceries”. One director spent €34,000 on taxis using her spouse’s taxi firm.