Site where where 1916 leaders surrendered a national monument

The Save Moore Street Campaign have called for the preservation of the entire street after recent design concept proposed to demolish two buildings on the terrace. Video: Ronan McGreevy/ Enda O'Dowd 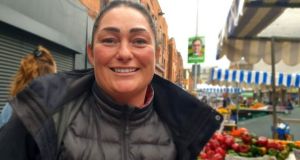 Siobhán Hegarty: Visitors to Moore Street are getting robbed, they are getting abused. Photograph: Ronan McGreevy

A casual visitor to Dublin’s Moore Street would be hard-pressed to identify the national monument which has been the subject of two decades of bitter debate.

Only a small commemorative plaque, covered in bird droppings, denotes the location of 14-17 Moore Street, the site where the Easter Rising leaders surrendered and which is known to some as “Ireland’s Alamo”.

Otherwise, the exposed wires, graffitied shutters and boarded up windows indicate just another parade of shops that has seen better days.

Developer Hammerson proposes incorporating the national monument into a major redevelopment plan for the area including Moore Street, O’Connell Street and Parnell Street.

Crucially for the traders, which give the street its character, it intends to include them in the final development.

The traders are left on Moore Street have heard it all before and can be forgiven for a degree of scepticism. Angela Wright, whose vegetable stall is directly under the national monument, says she is unlikely to be around for any redevelopment.

“If they give me a few bob, I’ll walk out and they can do what they like,” she said.

She looks forlornly at the straggle of people walking up and down Moore Street in what used to be one of the busiest thoroughfares in the city centre.

Ms Wright has been a street trader for 50 years. Things have never been worse, she says. “There’s no business here anyway. You could write a book on the stalls, it’s that quiet.

“Nobody is coming into the city to buy anymore. They are coming in to walk around and buy illegal cigarettes. It’s getting harder and harder.”

Another trader, who didn’t want to be named, said Moore Street had become a magnet for “alcoholics and degenerates”.

“We are working in a violent environment. Anything is better than what’s here at the moment,” she said.

The Government declared 14-17 Moore Street a national monument in 2007. Plans to have a commemorative centre on site by 2016 did not come to fruition as a consequence of various legal disputes which centred around the contention as to whether the whole terrace and surrounding lanes were a battlefield site or if the battlefield site should be confined to 14-17 Moore Street.

Campaigners appeared to have won when in 2016 Mr Justice Max Barrett declared in the High Court that the whole area was a battlefield.

A long-running proposal by Chartered Lands to build a €1.25 billion shopping centre on site was derailed by the economic recession and the loans were bought by Nama.

Hammerson acquired most of the site from Nama apart from 14-17 Moore Street which was bought by the State in 2017 for €4 million.

In a statement Hammerson said it was committed to “protect and enhance the Moore Street area’s unique heritage including its market and connections with 1916.”

The draft plan has been welcomed by the Minister for Culture, Heritage and the Gaeltacht Joseph Madigan.

“It is very clear that they are much more reflective of the history and culture of the area and will take much greater cognisance of its architecture and heritage,” she said.

“I also welcome the commitment to the Moore Street traders and how the events that took place on Moore Street during the 1916 Rising are to be commemorated and acknowledged.”

In 2017 her predecessor Heather Humphreys set up the Moore Street advisory group to chart a way forward for the street.

Its chair Tom Collins said the group intends to publish a report in June which will deal with three issues: the national monument at 14-17 Moore Street, the rest of the street and the laneways around it and the street traders in the area.

Mr Collins said the group had already taken the view that the national monument, as far as possible, should be preserved as it was in 1916 when the rebels entered it with a visitor centre in the courtyard.

“On the basis of what we have seen, there is a strong view in the committee that the plan represents a significant development on what Chartered Lands had originally proposed,” he said.

Chair of the 1916 Relatives’ Association Brian O’Neill said he felt that the Hammerson proposal is the “basis for further discussion to ensure that the tweaking meets our requirement”.