Liking yourself is ‘act of civil disobedience’, conference hears

Disability continues to be ‘viewed as a negative’ – actor and activist, Francesca Martinez 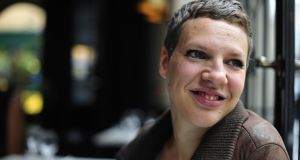 ‘There is a perception that if a person differs from the social norm they are going to suffer more,’ says Francesca Martinez. File photograph: Aidan Crawley

Accepting yourself as you are is “an act of civil disobedience” in a culture that “promotes self loathing”, actress, comedian and disability advocate Francesca Martinez has told an audience in Trinity College Dublin (TCD).

Ms Martinez, who has cerebral palsy and describes herself as a “wobbly woman”, said there was a need to challenge how society, bolstered by the medical professions, defined people by what they could not do.

“In terms of creating a truly inclusive society, one of the most important elements is to focus on how we define people. Someone like me, I have been defined all my life [by] what I can’t do, but we all have things we’re not good at. Nobody ever said ‘David Beckham is a great footballer but have you ever tried to play trivial pursuit with him?’.”

From her birth, and through her childhood, her parents had been presented with dire warnings in relation to her potential and the difficulties she would face, Ms Martinez said.

“A lot of fear in society surrounding difference comes from the medical community who really view disability as a threat and a negative. There is a perception that if a person differs from the social norm they are going to suffer more.”

A consultant told her parents she would never lead a “normal life” she said.

“Who wants a normal life? I want a f**king amazing life! ... I was very lucky my parents managed to reject the negative framing and just love me as Francesca, their daughter.”

She spoke of her long-term partner, who is Irish, and the reactions they received when they first met.

“When we first got together lot of people said ‘it’s amazing you’re going out with someone different’, I’d say ‘he’s only Irish’.”

While she has developed a successful stand-up comedy career based in part on lampooning these negative stereotypes, she said they did hit her hard in secondary school, where she was badly treated by other pupils and also teachers.

“I felt very isolated, I had no friends. They all want to be my friend on Facebook now, but they can f**k off.”

She recalled telling her career advisor that she wanted to be an actress.

“She said maybe you could think about a career in computers? The next year I got a part in Grange Hill.”

She continued in the role for five years and describes it as an “amazing experience”, but she says: “when I left that show, if I was truly honest, I still wished I was normal every day.”

An encounter in a pub when she was 19, where she made reference to being “abnormal” in conversation with a man, led to a change in her thinking.

“He said ‘you are abnormal, most people in the world live in dire poverty’.”

Unfortunately he turned out to be “an arsehole” she said.

“The point is even an arsehole can change your life. For the first time in so long I didn’t feel wrong or faulty or abnormal or broken, I just felt like me, Francesca.”

Liking yourself is a “political act” in a consumer culture which benefits from preying on insecurities, she said.

Ms Martinez was speaking at the Silence, Communication and Society symposium in TCD.