DUP will defeat Brexit deal if it is not changed, warns Foster

Brexit was the central topic to the DUP party's annual conference in Belfast and Arlene Foster's retains strong support with the party faithful. 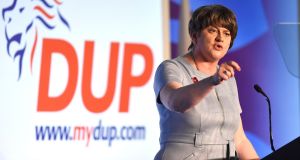 Without change to the UK-European Union Brexit deal the DUP will not support the British government, party leader Arlene Foster insisted at her party’s annual conference in Belfast on Saturday.

She told about 350 delegates at the Crowne Plaza Hotel in south Belfast that without change the DUP’s ten MPs will not vote for British prime minister Boris Johnson’s agreement.

“On Brexit, we will not give support to the government when we believe they are fundamentally wrong and acting in a way that is detrimental to Northern Ireland and taking us in the wrong direction,” she said.

“We will oppose them and we will use our votes to defeat them,” added Ms Foster. “With our ten votes being so critical in Parliament, there is a great responsibility to make sure we support the right decisions for Northern Ireland but have the boldness and strength to stand up and say no when we need to.”

The DUP leader said that the current deal, which the party argues would create a border down the Irish Sea, “would be bad for Northern Ireland economically and will weaken the foundations of this great United Kingdom”.

“We have been clear and honest with the government throughout this process and we expect the same in return. The customs and consent arrangements must be revisited and a one nation approach adopted.”

Ms Foster said the DUP was ready for a general election although she did not say whether she would support the vote for an election in the House of Commons on Monday. “We have a strong record to put to the people and now more than ever we will seek a mandate to ensure Northern Ireland has the strongest team fighting for it,” she said.

“Make no mistake this will be the most unpredictable election outcome in the United Kingdom for a generation,” she said.

Ms Foster in her speech indicated that the DUP was prepared to make compromises on the Irish language, viewed as the main obstacle to the restoration of the Northern Executive and Assembly.

“Unionism should be inclusive, welcoming and embracing to all. It should permit individuals to express the cultural life they choose,” she said.

“Whilst many focus on Ulster-Scots and unionism, let me be clear, it is not incompatible to be an Irish language speaker and a unionist – indeed there might even be one or two here today,” she added.

Said Ms Foster, “culture can play a big part in our identity and who we are. Too often though in Northern Ireland culture has been demeaned and demonised, or proven detrimental to progress here. Northern Ireland is rich in different cultures, and we need to embrace and cherish them in a manner that threatens no one.

“Those who seek to engage in a cultural war engage in a zero-sum battle. Northern Ireland is big enough to accommodate everyone’s culture. Indeed as unionists, it is in our long-term strategic interests to ensure that everyone, regardless of their culture, feels at home in Northern Ireland

“Too many fear the peace process has stalled and that we are heading in the wrong direction. Taking decisions locally undoubtedly helps with the bread and butter issues, but it also provides vital stability. It bolsters the peace and strengthens relations. And that’s good for Northern Ireland.

“I want to see the Assembly and Executive rejuvenated and re-energised. We are up for that. We know that Northern Ireland works best when we work together.”

Ms Foster said that more than two years ago she made a commitment “to seek accommodation and to legislate in a balanced way for language and culture, including for the Irish language”. The DUP recognised there were many in Northern Ireland who love the Irish language and for whom it is an intrinsic part of who they are.

“So, my offer stands. If we can find a way to craft language and culture laws that facilitates those who speak the language, but does not inappropriately infringe on or threaten others, the DUP will not be found wanting,” she said.

Referring to the sitting of Stormont last Monday that failed to overturn the Westminster vote liberalising abortion law in Northern Ireland Ms Foster said, “We will continue to work with all of those who recognise that both lives matter.”

Said Ms Foster, “whether in local council chambers, London or Brussels it is the Democratic Unionist Party that is at the centre of the debate. Sinn Féin claim to be shaping the debate but in truth they have been reduced to glorified lobbyists posing for pictures to post on Twitter.”

She added, “we will never resile from our belief that Northern Ireland is best served by being part of the UK, but unionism is about all of us and not anyone alone. It is about everyone working together as one, for the greater good, to build a Northern Ireland we can all be proud of. We have much to do in the months ahead.”