The EU’s chief Brexit negotiator Michel Barnier has said that securing a deal at this week’s EU summit will be difficult but “still possible” after Boris Johnson made fresh concessions on the crucial issue of the Irish Border. Video: Reuters 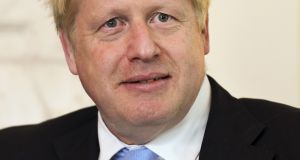 The Government was hopeful last night that a draft Brexit deal may be presented to a crucial summit of European leaders tomorrow, paving the way for the UK to leave the EU by the end of the month.

As British prime minister Boris Johnson briefed the DUP on the continuing negotiations, senior sources in Dublin said the prospects of a deal were “looking more promising”, although things “could change”.

Dublin was understood to have not yet received final texts being negotiated between the EU and the UK by last evening. This indicated that political agreement had been reached on the main points and precise details were being worked through.

It is understood negotiations centre on a measure that is broadly similar to the previous backstop that only applied to Northern Ireland, which saw a customs border in the Irish Sea, although it would effectively be rebranded. Consent in Northern Ireland for any solution agreed is the other major element. However, DUP leader Arlene Foster said comparisons with the previous backstop are “very far off the mark”.

It is expected the deal will be sweetened for the DUP with a multimillion-euro package of investment funded by the EU, London and Dublin.

Taoiseach Leo Varadkar yesterday said the “negotiations are moving in the right direction”.

A deal at the European Council tomorrow and on Friday, which could then be ratified by the House of Commons at a special sitting on Saturday, could mean the UK leaving the EU by the October 31st deadline, he added.

Ms Foster said any deal must respect the “constitutional and economic place of Northern Ireland within the United Kingdom. but it is important that we do work together to get a deal”.

The EU remains nervous that the deal would not be passed in Westminster, but the British government has expressed confidence it can secure approval in the House of Commons, a sense bolstered by cautious support last night from arch Eurosceptics.

One senior figure in Dublin said the “signals from London” were “consistent with the notion that he [Mr Johnson] wants to do a deal”.

Speculation about a general election in November on the back of a Brexit deal has increased, although Mr Varadkar says his preference is to go to the polls in May 2020.

1 Covid-19: Travel restrictions to stay and 'green list' put on hold amid fears of second wave
2 Bobby Storey: The IRA's planner and enforcer who stayed in the shadows
3 Miriam Lord’s Week: Martin sparks Olympian levels of whingeing in Fianna Fáil
4 Q&A: How close are we to having a Covid-19 vaccine?
5 Transgender Cork farmer (65) surprised at positive response to telling her story
Real news has value SUBSCRIBE