The Irish Times view on Brexit: stumbling into an election 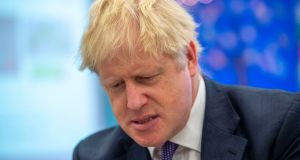 On Monday, just days before the UK is scheduled to leave the EU, British prime minister Boris Johnson will make what appears a doomed attempt to force a general election. Photograph: Paul Grover/Daily Telegraph/PA Wire

The stage is set for yet another day of inconclusive farce at Westminster on Monday when, just days before the UK is scheduled to leave the EU, British prime minister Boris Johnson will make what appears a doomed attempt to force a general election. Johnson has told Labour leader Jeremy Corbyn that if he agrees to an election date of December 12th, the government will make available “all possible time” between now and November 6th for the withdrawal agreement bill to be debated and voted on. This will be Johnson’s third attempt to persuade MPs to support an early election under the Fixed-Term Parliaments Act, which requires him to have the support of two-thirds of members, but it appears likely that the Labour-led opposition will again refuse to acquiesce.

Labour is right not to go along with Johnson’s latest wheeze. From a party-tactical perspective, the Fixed-Term Parliaments Act gives Labour a valuable prerogative that a ruling party usually holds: the power to decide when an election will take place. Corbyn, while no doubt keenly aware of the risk that he will appear to be running scared of the voters, would be remiss not to use that power to his advantage. A December election would suit the Tories more than Labour. If his deal passed before the election, Johnson could claim he had “delivered Brexit”. If it did not, he would tell the electorate its will had been stymied by wreckers in the House of Commons. Corbyn, who struggles for coherence on Brexit at the best of times, would be left at sea.

As long as there remains a chance to amend Johnson’s bill, then the Irish Government should be willing to let that process play out.

More importantly, it would be preferable for the parliament to make more progress on Brexit first. By calling Johnson’s bluff, Labour – which may not have the same leverage after an election – could force him into advancing his bill, and making compromises that would ease its passage. Johnson could make good on his threat and refuse to advance the bill any further, but that would be a hard sell for the Tories given that Johnson’s bill has already cleared the first hurdle.

EU leaders will wait to see what happens on Monday before deciding on the length of the next extension. French president Emmanuel Macron, impatient for the UK to leave and eager to put pressure on Westminster to get its act together, is pressing for the shortest possible delay. But on this he is isolated in the EU27; ultimately, his desire for a take-it-or-leave it offer to London will be trumped by the leaders’ desperate need to avoid being blamed for a no-deal exit.

That would suit Dublin. As long as there remains a chance to amend Johnson’s bill or even set down useful markers in the political declaration on Britain’s future relationship with the EU, then the Irish Government – already preoccupied with the damage the current deal may do to relations in Northern Ireland – should be willing to let that process play out.

1 Further 334 confirmed cases of Covid-19 reported, 174 of them in Dublin
2 Further restrictions expected for Dublin if Covid-19 infection rate does not stablilise
3 Ellen DeGeneres apology: Why do her words sound hollow?
4 Dublin farmer discovers overnight rave on his land
5 Three Covid-19 mistakes Ireland urgently needs to learn from
Real news has value SUBSCRIBE