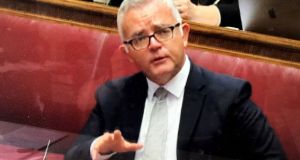 Former DUP Minister Jonathan Bell told the cash-for-ash inquiry on Thursday that there had been a concerted attempt to “smear” him because he had gone public on the botched scheme.

Earlier, the inquiry had heard detail of a furious exchange between Mr Bell and his special adviser Timothy Cairns, where the adviser described his Minister as “big balls”.

The Renewable Heat Incentive inquiry was told of a confrontation between Mr Bell and Mr Cairns in London in June 2015 shortly before the then DUP Minister for Enterprise, Trade and Investment was to meet Westminster Minister Amber Rudd.

There had been allegations to the inquiry that Mr Bell threatened to throw a punch at Mr Cairns and to break his finger at that London encounter.

Mr Cairns, according to Mr Bell, had insisted he would be attending the meeting with Ms Rudd, the then secretary of state for energy and climate change, while Mr Bell was adamant he would not be attending.

Mr Bell in his oral evidence on Thursday said he was aware of the allegation that he had thrown a punch but this was wrong and “had no basis in fact”. He had never tried to punch Mr Cairns, he insisted.

Mr Bell said he now understood that Mr Cairns had rowed back on the punch allegation. “I never used or threatened physical violence,” he said.

Mr Bell said that at the London confrontation Mr Cairns had wagged his finger in his face and insisted he (the Minister) would listen to him (Mr Cairns).

The inquiry already had heard that Mr Cairns allegedly said to Mr Bell, “Now you’re going to listen to me big balls.” Mr Bell said he did not want to use the full quote.

He believed the allegation was part of campaign of “fitting” him up over his part in exposing the faults in the renewable heat incentive scheme.

“I fear I have been the victim of a massive smear campaign against me,” he told the inquiry.

This alleged smear, Mr Bell believed, related to his decision in December 2016 to give a television interview to the BBC’s Stephen Nolan about the renewable heat incentive scheme which ultimately could cost the Northern Ireland taxpayer £490 million.

Mr Bell in his oral evidence further alleged that as part of that campaign the journalist and then head of the Northern Executive information service David Gordon had characterised him as a “monster who had to be put to sleep”.

He also alleged that the Sky Ireland correspondent David Blevins was providing advice to the DUP on how to “destroy” him by attacking him “on his (Mr Bell’s) Christian faith”.

On Thursday, a spokesman for Sky News denied that allegation. “The suggestion by Jonathan Bell that David Blevins advised the DUP on anything is completely and utterly untrue,” he said.

Mr Bell in his evidence also made reference to Mr Cairns “inappropriately” commenting to him in “garish and lurid detail” about the alleged “sexual misbehaviour” of two unnamed former DUP Ministers. This allegation was not pursued by the inquiry team.

Mr Bell also told the inquiry he would have closed the cash for ash scheme to new entrants in the summer of 2015 had he been properly briefed about the issue after he was appointed Minister.

Mr Bell insisted that in his initial departmental briefing after he was appointed the Minister of Enterprise, Trade and Investment (DETI) in the summer of 2015 no alarms bells were raised to him about the scheme.

This was in conflict with evidence provided this week by the then permanent secretary of DETI Dr Andrew McCormick who said at that meeting on June 8th 2015 he told Mr Bell “urgent action” needed to be taken to resolve the problems with the scheme.

Mr Bell said had he had such information at the start of his ministerial tenure he would have closed the scheme to new entrants.

“If you accept ministerial office you have to take unpopular decisions, it goes with the territory, you can’t spend money you don’t have,” said Mr Bell.

“Had this come to me and been left to me and left for me as a Minister in the department to make a decision and had I been told that we do not have budget for this I would have closed it . . . without hesitation but with a lot of pain and a heavy heart,” he added.