Prospect of owning home ‘a pipe dream’ for many, says Shortall 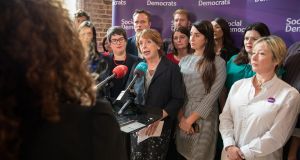 For many people in Ireland the prospect of owning a home is “becoming a pipe dream”, Social Democrats co-leader Róisín Shortall has said.

The party held a think-in on Wednesday in Dublin, which focused on “living affordable lives”, ahead of the Dáil resuming next week after the summer recess. Those in attendance discussed issues such as the housing crisis and the the high cost of childcare and education.

“The aspiration to own your home is becoming a pipe dream,” Ms Shortall said during her address, which noted the rising cost of living in the State and the need for greater investment by the Government in public services.

“The crisis of affordability in housing means that the average home in Dublin costs 11 times the average income, yet someone applying for a mortgage can only expect to borrow 3½ times their income.”

Ms Shortall said the Government also needed to be proactive on issues such as car insurance, education, public transport, and energy, which often “eat into people’s incomes”.

Ms Shortall accused Fine Gael and Fianna Fáil of playing “political games” as it appeared the former wanted an election but the latter, the support of which the minority Government relies on to stay in power, does not.

“The country can do without that kind of carry-on,” she said. “We’re heading into a period that’s very uncertain in terms of the future impact of Brexit. The Government needs to concentrate all its efforts on ensuring that we minimize the impact on our industries, particularly our export industry, and ensure that we have the best deal possible coming out of Brexit.”

Joe O’Connor, chairman of the Social Democrats, said the party had grown significantly since being foundedin 2015 and was looking forward to next year’s local elections.

“It is my firm view that we should have 80 to 90 candidates competing for seats across all local authorities areas, and I see no reason as to why we can’t elect at least 25 to 30 Social Democrat councillors,” he said. “We are here to shake things up and we want those of you who share our values to join our movement.”

Ms Shortall said the party had selected 21 candidates to contest the next general election, 13 of whom are women, and has organised in 28 Dáil constituencies. The party currently has two TDs Ms Shortall and fellow co-leader Kildare North TD Catherine Murphy, down from three as a result of Wicklow TD Stephen Donnelly leaving and later joining Fianna Fáil.