New Year’s Eve events guide: Where to go and what to do

Outdoor concerts, silent discos and best of New Year’s Eve TV to help you ring in 2020 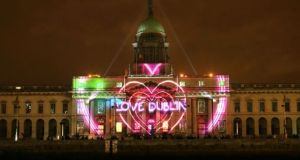 A number of events are taking place across the country on Tuesday night to ring in the New Year.

Tickets for the countdown concert at Custom House Quay in Dublin are still available for €36.90 with performances from Walking on Cars, Ash, Aimee and Lisa McHugh.

Concert goers will also be able to enjoy the “solar symphony” display that will be video mapped onto the walls and buildings surrounding Custom House Quay. Images of hurtling comets, shooting stars and spiralling Galaxies will be accompanied by a 20-piece orchestra and other musicians.

A New Year’s Day concert will also be taking place at Meeting House Square in Temple Bar between 3pm to 8pm on January 1st. Kila are due to headline the free event with performances from Wyvern Lingo, Brian Deady and Luz.

Dublin Bus said a Saturday service will operate on December 31st with last departures at 10pm. The 15 and 41 bus routes will stop operating at 10pm and begin operating again at midnight. A number of diversions will be in place to cater for the New Year’s Eve festival on Custom House Quay.

Gavin James will be performing in Killarney at the Gleneagle INEC Arena on New Year’s Eve with tickets from €32.90. A fireworks display will take place at Dingle Marina from 10pm.

Jack L and his band will perform at Cork Opera House with tickets from €33.50. A masquerade ball is happening at the Metropole Hotel in Cork city and a black tie evening at the Cork International Hotel.

Irish folk artists Lankum and Junior Brother will be performing at The Roisin Dubh on Dominick Street in Galway from 8pm, which will be followed by a silent disco. New Year’s Eve parties are also happening at Halo nightclub on Upper Abbeygate Street in the city and at the Skeff Late Bar and Kitchen on Eyre Square.

For those planning on ringing in 2020 from the comfort of their couch, RTÉ One will broadcast Una Healy’s New Year’s Eve party with the singer and the RTÉ concert orchestra being joined by the Waterboys, David Gray and Wallis Bird. This will be followed by a live countdown from the aftorementioned Custom House Quay concert in Dublin city centre.

Cork native Graham Norton will see through the last few hours of 2019 on BBC One from 10.20pm with Tom Hanks, Matthew Rhys and Spice Girl Mel C airing ahead of a London fireworks countdown show.

Patchy rain is expected in northern areas early on Monday, which will weaken as it moves southeastwards across the country.

Clearer spells will develop in the late afternoon with highest temperatures between 9 and 12 degrees. Winds will be generally light and variable in direction and a few patches of rain will remain in the south overnight.

It is likely to be a cold night with lowest temperatures of zero to three degrees generally, though it will be warmer in southern coastal areas.

Met Éireann says there will be a few showers in southern counties on Tuesday but it looks set to be dry across the bulk of the country with sunny spells. Highest temperatures of between six and 10 degrees are forecast in mostly light easterly or variable winds.

It will be generally cloudy overnight with a few patches of rain or drizzle possible in Atlantic coastal areas. Lowest temperatures will be between one and four degrees.