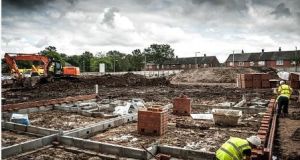 Fianna Fáil, Fine Gael, Labour, the Green Party and Social Democrats stated that State-owned land in Dublin must be used for public housing, and that Dublin City Council should lead the development of such land. File photograph: Getty

Dublin city’s newly elected council has pledged not to sell public lands to private developers for housing except in exceptional circumstances.

Dublin City Councillors reached an agreement which will be council policy for the five years until 2024.

They stated that State-owned land in Dublin must be used for public housing, and that the council should lead the development of such land.

That said they will reject any sale of public lands to developers unless the monetary benefit to the council is greater than the benefit which would accrue from building public housing on it.

Each party to the agreement will formulate their own position on the variation of the local property tax.

A night mayor will be appointed to develop Dublin’s night-time culture in conjunction with the development of a Dublin cultural manifesto.

Councillors also agreed to develop a multipurpose site of conscience at the location of the former Magdalene laundry on Sean Macdermott Street.

Fórsa campaigns director Joe O’Connor said the newly launched agreement marked a significant step toward achieving the goals of the campaign: “The agreement commits councillors to work towards publicly provided waste collection services. This is a very welcome and necessary step, and it makes sense to begin with a real commitment to improve services.

“We have a significant problem in Dublin with the illegal fly-tipping of waste. The provision of domestic waste collection in Dublin has become a chaotic and uneven service, and all of these problems stem from the decision to turn the service over to the private sector only a few years ago.”

Councillor for the South-West Inner City and one of the Labour members of the Agreement’s negotiation team, Rebecca Moynihan said the commitment to public housing showed the council had adopted many Labour policies.

She added: “We need to get real as a city in the middle of a housing crisis when it comes to the provision of housing, we can no longer accept the sale of land to developers who will not provide social and affordable housing or entertain the cost-rental model.

“As a council we will take our obligations to stopping climate chaos seriously by ensuring Dublin meets the zero carbon challenge by 2050. We will produce plans for making it easier for people to walk and cycle in the city.”

“Cities cannot just be places to work, there also needs to be a cultural soul. That’s why we have ensured our policy of creating a night mayor is included, to protect and promote our night-time economy. We will also work to ensure that young people have spaces to hang out across the city.”