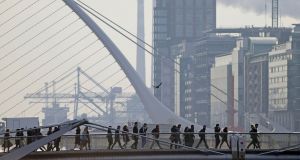 The proposed swimming pool is planned for close to the Sean O’Casey Bridge at George’s Dock. File photograph: Nick Bradshaw/ The Irish Times

Dublin City councillors will meet online on Tuesday to discuss plans for a heated swimming pool at the Liffey.

The plans, from the council’s docklands unit, envisage a €15m swimming pool close to the Sean O’Casey pedestrian bridge and near George’s Dock, where the council also plans a €22 million, white-water rafting centre.

The heated swimming pool would, according to plans sent to councillors, complement visitor attractions including the Jeanie Johnston famine ship and the Epic Diaspora Museum.

The idea is modelled on the successful Allas Spa complex in Helsinki and backers say it could be developed by the private sector on a 30-year lease from the council, generating more than €100 million in that time.

However, members of the council’s Central Area Committee and the North Wall Community Association have expressed reservations.

While “not wanting to pour cold water on the scheme” Councillor Nial Ring said: “I will not be rushing out to buy new speedos”.

Mr Ring said there were “bays and fine beaches” on the coast either side of the Liffey, “what do we need a swimming pool in the Liffey for”, he asked. The former Lord Mayor said a public consultation had been held, on what locals wanted in the area.

“Nobody said a swimming pool in the Liffey. Why can they not come up with something the public said they wanted” he asked.

The Northwall Community Association gave the proposal an even damper reception. In a statement on Friday the community said “this proposal is not acceptable” given the immediate needs in the locality.

The statement said: “The long established after schools / creche group in Sheriff Street is in urgent need of a premises to accommodate the 64 pre-school children and 12 workers that look after them.

“There is a recently vacated Fás training centre in Sheriff Street that we’re told requires at least €1 million to make it functional for the after schools but there’s no sign of that happening.

“Yet at the same time its deemed suitable, to pardon the pun, splash the cash on a super size hot tub. This is completely unacceptable to the local community. We need urgent immediate help for 64 young children and instead we’re getting a whirlpool,” the statement concluded.