Transdev, operators of Dublin's Luas tram system, has released footage of a series of near misses between Luas trams and pedestrians, cyclists and motorists. Video: Transdev Ireland 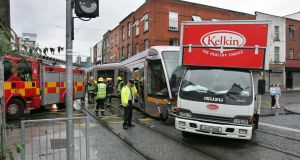 Gardaí and emergency services personnel at the scene of a crash between a truck and a Luas at the junction of Benburb Street and Queen Street in Dublin. File photograph: Colin Keegan/Collins

Junctions at Blackhall Place and Queen Street in Dublin’s north inner city have the highest number of collisions on the Luas network, according to Transport Infrastructure Ireland (TII).

The state agency said despite “various interventions” at both locations, collisions and near misses continue to be recorded.

The comments were made in a submission from TII’s Director of Professional Services, Helen Hughes, to the National Transport Authority (NTA) in relation to the proposed Blanchardstown to city centre corridor under the BusConnects plan last March.

Ms Hughes said, in response to the collisions and near misses: “Luas operations have been modified resulting in delay to trams through this area and impacting on the ability to maintain headways”.

“TII would welcome the opportunity to participate in the design of these junctions to ensure that Luas operation and safety are not compromised,” she said.

In a joint project involving the NTA, the Garda and Dublin City Council, a pilot camera was set up where the Luas red line crosses Blackhall Place in June 2015, which detected 1,300 road users breaking the lights over an 18-month period.

The Garda wrote to the NTA earlier this year to confirm the Blackhall Place camera will be run permanently to detect red light running and recommended two additional camera installations be set up at Con Colbert Road and on Queen Street.

The NTA said it would “seek to advance these arrangements in collaboration with Dublin City Council and with An Garda Síochána”.

“The resulting impact on the tram service is stoppages and delays. Motorists need to stop amber gambling and understand a tram is on a track, it cannot swerve, and trams take time to stop,” a spokeswoman for Transdev said.

The provision of dedicated bus lanes through the M50/N3 junction will “inevitably result in a loss of capacity at this junction,” Ms Hughes said.

“The information as presented to date does not demonstrate the impact of this loss of capacity and as such TII cannot comment on this proposal at this time. “In addition to the loss of capacity, the provision of dedicated lanes may result in longer weaving movements on approach to the junction which could lead to undesirable and unsafe driver behaviour,” she added.

In a separate submission, Ms Hughes noted there are two alternative options presented by the NTA for the Santry village area in relation to the Swords to city centre corridor.

The NTA has proposed one-way traffic passing through Santry in the northbound direction while southbound traffic would be diverted via Coolock Lane and the Santry bypass.

The alternative option includes a widening of the Swords Road through Santry to allow a traffic lane in each direction to be maintained, in addition to the bus lanes, which would impact on the front gardens of between 70 to 80 properties.

“Options that reduce the volume of traffic transferring onto the national roads network in this area would be preferred by TII,” Ms Hughes said.

The NTA has said it would not be commenting on individual submissions and that all submissions will be “read and reviewed” in the coming months. Public consultation in relation to core bus corridor project closed last month

A revised redesign of the network is due to be published in September and a further round of public consultation will begin.

TII is responsible for the country’s national roads and light rail infrastructure.