Chef supply crisis: ‘I’m certain there are no chefs left in country’ 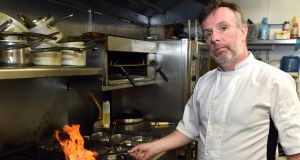 Liam Edwards, owner of Jim Edwards restaurant, Kinsale, Co Cork. “I’m seeing restaurants closing a few days a week because they don’t have the staff or they’re trying to keep them fresh,” he says. Photograph: Provision

But for the past three months he has been full-time in the kitchen, helping out his short-staffed team of chefs.

“I’m certain there are no chefs left in the country,” says Edwards, owner of Jim Edwards restaurant.

“I’ve rung 10 job agencies in the last few weeks: they don’t have them. I’ve advertised locally and nationally: no response... I’ve no choice but to help out in the kitchen. I’m not even a qualified chef; I only know from watching others.”

The arrival of eastern European workers during the last economic boom meant shortages never got out of hand, he says.

But with fewer foreign staff to choose from, close to full employment in the wider economy and and high living costs, Edwards say the shortages have now reached crisis point.

“It is really at an all-time low. I’m seeing restaurants closing a few days a week because they don’t have the staff or they’re trying to keep them fresh.”

Official statistics back up Edwards’ experiences. In 2015, the Expert Group on Future Skills Needs reported that the hospitality sector was facing a deficit of about 5,000 chef trainees annually.

Three years on, the restaurant sector estimates that this deficit has climbed to about 7,500 a year.

Yet just 1,800 chefs are qualifying each year from certified culinary training programmes.

The Restaurants Association of Ireland says the education system is partly to blame for the staff shortages.

The association’s chief executive Adrian Cummins says there used to be a good system in place known as Cert, the State tourism training agency, which was responsible for providing a trained workforce for the hotel, catering and tourism industry. It was abolished in May 2003.

Cummins says a new system of apprenticeships has not filled the gap.

A new commis chef apprentice programme was launched in 2017, while a chef de partie programme began in September last year.

Like most other “earn and learn” apprenticeships, they involve a combination of learning on-the-job with an employer as well as studying in college.

Numbers, however, are relatively small – about 117 are on culinary apprenticeships.

Mr Cummins says a key obstacle is the fact that restaurants must pay apprentices while they are at college.

This is in contrast to other apprenticeships developed before 2016 – such those in the construction sector – where a training allowance is paid by the State to apprentices while attending off-the-job training. In some cases, a contribution towards travel or accommodation costs may also be paid.

“This means some students in the culinary sector are at a marked disadvantage compared to their counterparts training in other industries,” says Mr Cummins.

“This was a policy decision taken as part of the apprenticeship review in 2014,” she says.

These new apprenticeships were developed in consultation with the education and industry and were aimed at allowing more flexibility in their design.

Mr Cummins says it is now time for a review of apprenticeships to ensure culinary students receive the same benefits as apprentices from other sectors.

He has applied for a work permit for a chef in Turkey. That was five months ago; however he is hopeful the chef will be able to join his team shortly.

“It will help,” says Edwards, “I used to have a staff of eight chefs. It’s now down to four, and one part-time. But I feel the wages and working conditions we’ve offered are still very good.”