Child homelessness in midlands more than triples in two years 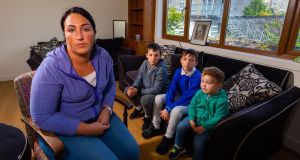 Child homelessness in the midlands more than tripled in two years, while the cost of providing emergency accommodation in the region is on course to exceed €2.5 million this year – an almost 80 per cent increase since 2017.

Figures for the region which includes counties Laois, Offaly, Longford and Westmeath show there were 30 homeless children in 18 families in January 2017.

By January this year the numbers had increased to 101 children in 35 families.

The latest figures show that during the week of 22nd to 28th April the number of homeless families in the midlands had further increased to 45, though the number of children had fallen to 79 .

Tony O’Riordan, chief executive of Midlands Simon Community, said there had been a real change in the profile of homelessness in the region over the last few years with more families presenting. “Last year we dealt with 58 families with 133 children, as well as 219 single adults.”

Services in the region are “totally underfunded,” he said. “As a region the midlands gets less than 2 per cent of the national homelessness budget.” The 2019 national budget for homelessness is €146 million.

“There seems to be no understanding in Dublin of the challenges facing rural homelessness services. It’s totally different to city homelessness because families are so dispersed. We have one support worker for Offaly and they have to cover a region from Edenderry to Banagher [almost 80km].”

The managers there do their best for us, but it is noisy at night. The children aren’t getting enough sleep

Mr O’Riordan said there was a need to recognise the different type of need outside Dublin, including how spread out homeless families could be.

County Offaly consistently records the highest homelessness figures in the midlands. Among its homeless children are Mary-Isabelle O’Brien (14) and her siblings John (13), Patrick (12), Jamie (10), Tommy (8), Luke (5) and Joey (3). They and their parents, Michelle and Patrick, have been homeless since June last year.

They had been renting a three-bedroom house in Tullamore up until 2015, when they moved to England.

“We needed a fresh start at the time,” says Michelle. They had to return last year for family reasons, however.

Unable to source rented accommodation they presented at Offaly County Council as homeless.

They say they have no family with space to accommodate them in the area and were on the council’s housing list since 2012.

“First they told us there was no emergency accommodation at all. We linked in with Focus Ireland, and they told us about Mercy Law [a non-profit legal service specialising in housing issues]. They emailed the council about their legal obligations to the children,” said Michelle.

The children aren’t doing well. It’s really affecting them. I just feel like their lives are being broken

The family was placed in a hotel in Tullamore now solely housing homeless families, in mid-July 2018. However, they could not stay there long term.

For the past six weeks they have been in two rooms over a bar in accommodation in Banagher – almost 40km and an hour’s drive away from the children’s schools. They pay the council €80 a week for the accommodation.

“The managers there do their best for us, but it is noisy at night. The children aren’t getting enough sleep. . . Luke is falling asleep every morning on the way to school,” says Michelle.

Her younger children’s teachers have raised concerns about them.

“The children aren’t doing well. It’s really affecting them. I just feel like their lives are being broken.”

They have looked everywhere for a home to rent. “We can’t find anywhere. We can’t even get a viewing. We went to the council last week, asking if there was any hope of a house soon and they couldn’t tell us anything, can’t even give us a time frame. ”

The family is spending “a fortune” on petrol, she said, adding that the council “must be spending a fortune” on emergency accommodation for families like hers.

“It’s crazy. Why aren’t they spending the money on buying or building houses for people?

“You hear stories, read stories about people in emergency accommodation but you don’t understand the depth of how it impacts people’s lives, physically, emotionally. I feel like I am going around in a cloud of hopelessness, but I have to keep things going for the children. Every morning Luke wakes up and asks: ‘When are we getting a house, mummy?’ I just say: ‘Hopefully soon, son.’

“You take a home for granted. It’s only when you lose that you realise a home makes so much difference to the basics of your life.”

Offaly County Council did not respond to The Irish Times, despite repeated contacts by phone, email and in person.