HIV programme ‘will be undermined’ by lack of capacity 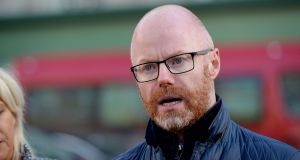 Thousands of people are being turned away from sexual health clinics across the Republic, which will undermine a programme for preventing HIV due to be introduced later this year, according to Fianna Fáil.

The PrEP (pre-exposure prophylaxis) HIV prevention programme is being implemented by the Government following advice from the State’s health watchdog that it would be safe and cost-effective.

The programme involves the pre-emptive use of antiretroviral medication to prevent HIV infection, regular monitoring and testing, as well as advice and counselling on safer sex practices.

HIV infection remains a significant public health threat, with 492 diagnoses in 2017. Male-to-male sexual transmission accounts for more than half of cases. An estimated 7,000 people are living with HIV in the Republic.

Fianna Fáil health spokesman Stephen Donnelly said on Sunday that the future roll-out of PrEP will be undermined by the HSE’s unwillingness to invest in STI screening programmes in Dublin and across the State.

“Only recently, I have been contacted by several gay men who were turned away from the Gay Men’s Health Service (GMHS), located on Baggot Street, due to a lack of capacity,” he said.

“This is an ongoing issue, and one which the staff in the clinic are doing their level best to manage. The HSE must fund additional medical, nursing and admin support for the GMHS.

“Put simply, demand for the service is outstripping the existing capacity of the clinic. Over the last three years, the number of people presenting to the clinic for STI screening has nearly doubled from less than 6,000 to more than 11,000.”

A 34-year-old man who has been attending the GMHS for STI screening since 2012 told The Irish Times he had been turned away twice in recent months.

“There never used to be any issues,” he said. “Obviously some nights would be busy but you would always be seen. You might have to wait 90 minutes or two hours but you’d always get in and get a testing.

“Twice since January I’ve arrived a bit earlier and was told there was only capacity for 25 or 30 appointments and that it was at the end of it.

“There’s just not enough capacity. The staff are great and they work really hard, but they’re at a point now where I just don’t think they can do anymore.

“It’s all very well offering access to PrEP, but it will only work if people can get access to screening. It defeats the purpose.”

The man, who did not wish to be named, said the alternative is to pay a GP €150 for a screening.

“But local GPs just don’t get it,” he said. “Gay men like going to the GMHS in particular because staff understand everything. They don’t judge you and they don’t ask stupid questions. They know what questions to ask and the type of language to use.

“This isn’t just about HIV. We have rocketing cases of syphilis, chlamydia and gonorrhoea are rocketing in Dublin. They need treatment irrespective of PrEP. If you’re a 20-year-old and you’re turned away, you might not come back for six months.”

The Department of Health have been contacted for comment.

Last Friday, when it was announced the PrEP HIV prevention programme would be implemented by Government following advice from the State’s health watchdog HIQA that it would be safe and cost-effective, Minister for Health Simon Harris said he wanted to see a reduction in the number of new HIV diagnoses in Ireland.

“Increasing the availability of PrEP will help us to do so. This report not only confirms that PrEP can help to prevent HIV amongst those who are high risk, it also shows how a PrEP programme could save money,” he said.

“My Department and the HSE will fully consider the advice from the HIQA report as we continue to plan for implementation of a programme later this year. I note HIQA’s advice in the report on the need to invest in our sexual health services so we can deliver a high quality, holistic programme.”