Rental crisis: Into the west may be the best way out

According to a Daft.ie report it is far more prudent to buy a property in Sligo than to rent one 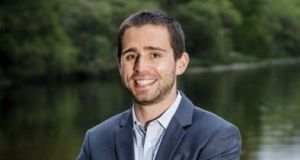 Alex Lustig near his home in Sligo on the shores of Lough Gill. He was paying $1,500 a month for a small bedroom with a shared bathroom and kitchen in New York

After seven years in Dublin, Shane McVeigh (26) got a job as a senior software developer with Overstock in Sligo and moved back to his home town last November. He has already bought a house there.

“The rents are crazy in Dublin – sometimes double the cost of rent in Sligo ,” he says.

If he had stayed in the capital he would not have been able to save for a deposit for many years. Now he is in the happy position that his mortgage repayments will be less than his rent in Dublin which was €700 a month, a bargain compared to the €2,000 a month some pay for apartments in city centre locations.

The northwest is becoming a hub for tech jobs and following a string of major job announcements recently in companies like Abbott, Abbvie, Phibro, LiveTiles and Overstock a steady stream of young professionals are arriving in the region.

When recruitment company Collins McNicholas launched its Why I choose the North West study recently, a short commute, availability of good schools, and attractive rents especially when compared to Dublin were recurring themes among the over 200 professionals interviewed.

Antoinette O’Flaherty, director at Collins McNicholas, said more affordable rents meant more disposable income. The opportunity to live in quality accommodation which may be a 10-minute drive from the office – and the beach – is a selling point when she is recruiting staff.

“These people see the exorbitant cost of living in Dublin where they may have friends on the same salaries who have much less disposable income,” said O’Flaherty.

New Jersey native Alex Lustig, an analyst with LiveTiles in Sligo, was paying $1,500 a month for a small bedroom with a shared bathroom and kitchen in New York. Having friends over was never an option in his cramped accommodation. Now he’s paying €750 a month for a spacious two-bedroom apartment, a 15-minute walk from his Sligo office.

“I’ve also had friends come stay at my place which was never a luxury I had in NYC,” he said.

Matthew Kavanagh, a senior executive with AbbVie, Sligo, and a native of Kildare, is also enjoying the benefit of higher disposable income since moving.

“My girlfriend and I are paying €750 a month for a three-bed duplex apartment just a 10-minute drive from Sligo town, while our friends are paying €1,200 a month for a small bungalow in Kilcock, Co Kildare, and they have a long commute to Dublin on top of that,” he said in the Collins McNicholas report.

Padraic White , chairman of Collins McNicholas and former managing director of IDA Ireland, also sees that the availability of quality accommodation, close to the beach or the mountains, is an attraction for those used to exorbitant rents elsewhere, but he is wary.

People like Michelle Lally from Northwest Simon and Dr John Pender From IT Sligo are all too aware that less availability combined with lower incomes and soaring rent is already creating hardship for many.

“It is grand if you are a professional. Rents are cheaper than in Dublin but a quick look on Daft.ie shows that a three-bedroom house in Sligo can cost €900,” said Lally. “If you are eligible for social housing and on HAP [housing assistance payment] the most you get for a family is €600 a month.”

She is aware of families who because they have to make up the shortfall in rent are as a result depending on St Vincent de Paul for food.

“When they pay the rent they are being pushed back into poverty. Or they are being forced out of Sligo town into rural towns where rent is lower but where is no public transport or support services.”

Northwest Simon says that while it is illegal to do so, many landlords are not accepting people on HAP.

“Today there are just 27 family homes to rent on Daft.ie for the whole of county Sligo,” said Lally. “Rents have climbed massively and are out of reach of a lot of people on social welfare or on low incomes.”

She said that at last some social housing development was in the pipeline but after five years of inactivity “nobody gets allocated a council house now”.

Dr Pender noted that a drop in disposable income over the period 2008-2016, allied to rent increases in some areas, made renting even more unaffordable for many.

CSO statistics show that in Leitrim average disposable income dropped 17.3 per cent from 2008 to 2016, compared to a drop of 11 per cent in Sligo, 16 per cent in Donegal, and 23.4 per cent in Roscommon. In Dublin the average reduction was 6 per cent.

An analysis of rent costs in Co Sligo shows, for example, an increase of 3 per cent from 2008 to 2018 when disposable income was down by 11 per cent, “making it even more unaffordable to rent now compared to 2008”, said Dr Pender.

The lecturer in social studies at IT Sligo says that Residential Tenancies Board (RTB) data for average monthly rents in the region reveals a drop in rent in some areas from 2008 to 2018, but a steady increase from 2013 to 2018, especially for one-bedroom apartments.

According to the Daft.ie report, it is far more financially prudent to buy a property in Sligo than to rent one. For example, buying a three-bedroom house in Sligo with a mortgage term of 30 years at the standard 3.5 per cent interest rate would cost €384 per month. “To rent this property would cost €732 per month a whopping €348 per month more. In other words it costs 48 per cent more per month to rent,” said Dr Pender.

Dr Pender says the vacancy rates are due to such factors as rental property being unlet, property for sale, owners deceased, farmhouses abandoned, long-term vacancies, emigration, people having moved into nursing homes or hospitals, units due to be renovated or properties being boarded up.

Minister for Housing Eoghan Murphy has said residential vacancy rates are difficult to reconcile when so many people are in need of housing.

Lack of new builds is also key, and Dr Pender says that the “glacial roll-out of new builds” is one of the factors adversely affecting rent affordability in the northwest. In the first quarter of 2019 there were 11 registered new builds in Sligo and the same figure in Leitrim, compared to 39 in Roscommon and 85 in Donegal.