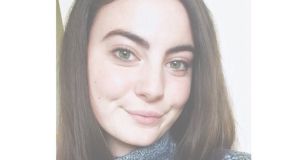 Sara Feeney spoke for the first time this weekend about the rescue.

Singing Taylor Swift songs and watching a small pod of dolphins off the Aran Islands helped two Galway cousins keep their spirts up while waiting to be rescued after spending over 15 hours at sea, it has emerged.

Sara Feeney (23) and her 17-year old cousin Ellen Glynn, were found shortly before noon last Thursday after going missing when they were blown out to sea while paddleboarding at Furbo, a few miles west of Galway city on Wednesday evening.

A huge search operation was launched and fisherman Patrick Oliver, a member of the Galway lifeboat crew, and his 18-year old son Morgan found the two young women clinging to a lobster pot buoy two miles south of the Aran Islands.

Speaking for the first time this weekend Ms Feeney, who was released from University Hospital Galway on Thursday evening, said she and her cousin had never discussed not making it home at any time during their ordeal.

Singing Taylor Swift songs helped them make it through the night at sea after they tied their paddle boards together, the eldest of the girls said.

She told The Sunday Times seeing meteor showers and phosphorescence on the sea had sustained them as did a small pod of dolphins off Inis Oirr.

“We didn’t even verbalise what might happen, or what we might both be thinking. I think if we had panicked at all, things could have been very different. I know if Ellen had panicked, I would have found it very difficult,” she said.

Ms Glynn, who spoke about their dramatic rescue on Friday, was discharged from University Hospital Galway on Saturday evening.

Her parents Deirdre and Johnny Glynn and their other three daughters Hannah, Clara and Alice, were busy on Saturday afternoon preparing for the return home of their eldest child.

A string of welcome home balloons were hanging inside the porch of the house at Binn Bhán and mum Deirdre said that while it will be a relief for some degree of normality to return, they are anxious to assist the emergency services who came to their aid by launching a fundraising operation.

Her husband Johnny, the former Galway United captain who scored the only goal which won them the 1991 FAI Cup, met the fishermen who rescued the two women for the first time on Friday evening to thank them.

On Saturday President Michael D Higgins said he was just one among many who were absolutely delighted there was a happy outcome.

“Their families are people who have given a lot to their communities, and John Glynn (father of Ellen) has given an enormous amount of support to sport, and to soccer in particular,” he said.

He was “lost in admiration for the Oliver family” who he said represented generations of wisdom in relation to the sea.

“When opportunity allows, I look forward to paying tribute to Patrick and Morgan Oliver,” he said on Twitter.

Speaking of the ordeal on Friday Ellen Glynn said she and her cousin were only a few minutes in the water when they realised that they had drifted far from shore. The wind was rising and they were finding it difficult to get back. They shouted to attract attention on the beach, where Sara’s mother was waiting for them, but could not be heard.

They tied the two boards together and thought that the alarm would be raised quickly and they would be found that night. “We were sitting there on the boards waiting for a boat to come.”

By then it was “pitch black”. When they saw a boat in the distance they started to scream but failed to attract its attention. They also saw a rescue helicopter sweep overhead and thought it would see them because of the high-viz strips on their life jackets.

“Some of the boats came really close, but they couldn’t hear us.”

Initially the water had been warm, but when the sun went down it was very cold with heavy rain, thunder and lightning. “We were absolutely frozen. We were worried about how cold it was. We were shaking like leaves.”

Let coronavirus spread through under-60 population, Dáil committee to be told

1 Let coronavirus spread through under-60 population, Dáil committee to be told
2 Miriam Lord: Let’s call a spad a spad – this Government has woeful timing
3 Ireland’s top earners ‘do not see themselves as rich’, study finds
4 US senators to consider Trump’s supreme court nominee
5 Obesity linked to hospitalisation and ICUs for Covid-19 patients
Real news has value SUBSCRIBE