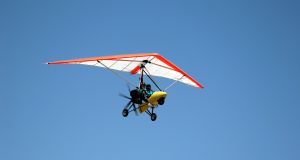 The microlight collided with one of a pair of poles supporting three 38 kV power lines just below the suspended cable and approximately 12m above the ground. Stock photograph: iStock

A microlight pilot flew too low and was distracted by people on the ground before his plane crashed into power line poles, an investigation has concluded.

The microlight collided with one of a pair of poles supporting three 38 kV power lines just below the suspended cable and approximately 12m above the ground. The aircraft crashed and Mr O’Connell later died of his injuries.

An investigation carried out by the Air Accident Investigation Unit (AAIU) of the Department of Transport found there was no fault with the solar wings Pegasus XL-R plane that Mr O’Connell flew during the fatal accident.

The unit based its investigation on eyewitness accounts of the incident where they observed that Mr O’Connell saw the power lines too late and tried to avoid them.

The AAIU concluded: “On the evening of the accident flight, the pilot chose to operate at very low level. While operating at a low altitude with the distraction of being observed by persons on the ground, it is probable that the pilot did not realise the close proximity of the power lines and the supporting poles.

“Although it appears that he reduced power in an attempt to avoid a collision, it was not possible to manoeuvre the microlight in the time available. The pilot was fatally injured on impact.”

The AAIU also discovered that was not properly licenced to fly and that the experience he claimed to have had was solely based on the amount of flying hours he told the owner of the microlight that he had completed.

He had been issued with a licence to fly microlights by the UK Civil Aviation Authority (CAA) in October 2007, but the licence experienced a year later and was not renewed.

Prior to the day of the accident, it had been 10 months since he had last flown. He had not kept a record of his flights hours nor did he undertake any flights with an instructor nor any skill test to renew his licence to operate a microlight aircraft, the AAIU found.