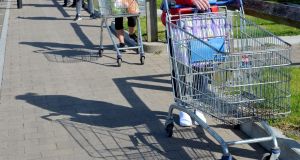 Manicures and home baking have been the unexpected beneficiaries of the coronavirus pandemic with sales of nail polish remover, fake nails, hand creams and baking trays going through the roof in recent weeks as people try to keep busy while confined to their homes.

Soaps, flour, eggs and toilet paper were all in high demand in the early days of the crisis and while these staples continued to be popular they have been now joined by beauty ranges, baking materials, colouring books and jigsaws as people get used to life in lockdown.

Tesco reported that sales of flour increased by 300 per cent over the course of last month while soap sales climbed by a more than doubly impressive 700 per cent as egg sales jumped by 60 per cent.

“More recently, we’ve seen an increase in non-food items as compared with this time last year,” a spokeswoman told The Irish Times.

With children at home more – and on their Easter holidays too – colouring books, jigsaws, DVDs and home entertainment have all seen significant increases while sales of baking trays, cake tins and celebrity chef cookery books have taken off as people look to make use of all the flour they bought in the early days of the crisis.

With the closure of non-essential services including barbers and hairdressers’ customers have taken to grooming themselves at home with false nails recording a 350 per cent and sales of home dye kits climbing by 107 per cent. Sales of shaving equipment has climbed by 400 per cent.

It has been much the same story in Lidl with “significant uplifts across several key product lines” reported.

Alongside increases in regular staple items such as fruit and vegetables, bottled water and tinned goods “we can see that our customers were likely to have been spending their quarantine perfecting their baking skills,” a spokeswoman said.

Sales of yeast have increased by around third , condensed milk, vanilla essence and baking soda have climbed by around 20 per cent with sales of bananas up too. “Perhaps this explains the volume of banana bread we are seeing on our social media feeds,” the spokeswoman said.

Lidl has also recorded an increase among many of its beauty products with nail polish remover, face creams and face masks proving to be particularly popular items for lockdown pampering. “Sales of hand cream are also up 30 per cent as people experience dry hands from all the recommended hand washing,” the spokeswoman said.

Aldi’s shoppers appeared to be somewhat more sensible – at least according to the data supplied to The Irish Times. Milk, butter and carrots occupied the top three positions in its top 20 selling products over the last three-weeks.

It has also noted that some customers are changing their shopping patterns with many people who are working opting to shop on Mondays, Tuesdays and Wednesdays as opposed to the traditional weekend period.

The Irish grocery market has seen phenomenal growth in recent weeks which is hardly surprising at it has the retail space virtually to itself.

Sales climbed by 27 per cent in March, the largest growth of sales every recorded with the average household spending an additional €122 on groceries, according to the latest figurers from industry analysts Kantar.

Sales of hand soap rose by 300 per cent while household cleaning products climbed by 170 per cent. Facial tissues and toilet roll were also in demand, with sales up by 140 per cent and 86 per cent respectively. Sales of both appears to have eased in recent weeks.

All told, grocery sales reached €2.8 billion in the past 12 weeks – topping last year by €250 million and exceeding the previous peak seen at Christmas 2019. Last year, 15 per cent of households made a shopping trip containing €120 or more of groceries – this year that figure almost doubled to 27 per cent.

Foods with a longer shelf life have seen the biggest uplift with sales of frozen and ambient foods – foods which can be stored at room temperature – climbing by 32 per cent while demand for fresh food climbed by 16 per cent last month.

More households than ever before placed an online order in the four weeks to March 22nd 2020, with approximately one in 10 households taking advantage of the service. This amounts to 25,000 more shoppers shopping online when compared with last Christmas which was when the previous peak was recorded. It is 54,000 more than the same period in 2019.