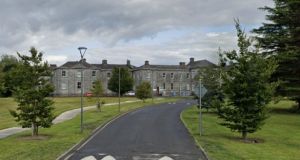 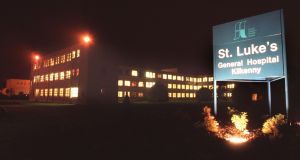 A woman in her 50s and a man in his 40s both fell ill while working at St Luke’s General Hospital.

Eight residents in a Co Laois psychiatric centre have died from Covid-19 since the weekend.

The HSE has confirmed that nine residents in the Maryborough Centre, St Fintan’s Hospital, Portlaoise, Co Laois, died over the bank holiday weekend.

Eight of the residents, aged between 66 and 84 years, had tested positive for Covid-19. The 17 residents who remain living at the facility are being managed “as if Covid-19 positive regardless of test results or the presence of symptoms”, the HSE said.

“The HSE would like to express its sincere sympathies to the families and friends of the deceased,” it added.

“Staff at the centre are in contact with the families of the deceased and are available for support and advice.”

The Maryborough Centre for Psychiatry of Old Age is a recently refurbished unit with multiple occupancy rooms and is registered with the Mental Health Commission for 28 beds.

The HSE said while a number of staff at the Maryborough Centre are currently on sick leave “the current compliment of staff is sufficient to manage the centre”.

“A number of additional staff were redeployed to the Maryborough Centre in the week prior to Easter weekend following the diagnosis of Covid-19 in the resident group and to support their greater care needs,” it said.

Dr Siobhán Ní Bhriain, the HSE’s National Lead for Integrated Care, said that the patients at the Maryborough centre were cared for by two consultants and a palliative care support team.

Efforts were made to identify which patients had the virus and those who did not so they could be separated, she explained to RTÉ radio’s Morning Ireland.

The type of care at the centre was called ‘cohorting’ she said which meant there were a number of beds in one room.

If a patient was suspected of having Covid-19 they would be isolated and nursed separately, she said. This could be “very difficult” in some situations.

The 17 remaining patients in the centre are being closely monitored, said Dr Ní Bhriain.

Dr Colm Henry, chief clinical officer at the HSE, said the virus was particularly lethal in settings with older people and that people who are older can present atypically with just “subtle signs or subtle changes” if they have the disease.

“What we need to do now is redouble our efforts to bring in timely, rapid testing for staff and residents in nursing home facilities,” he said.

He agreed that the virus is far more likely to spread in facilities where residents share rooms.

“If we were designing a type of care that was suitable for pandemic management we wouldn’t start here…we certainly would have a single room occupancy everywhere,” he said.

“But we don’t so what we have to do in this pandemic management is work with the tried and tested clinicians who are taking care of these patients.”

Separately, two healthcare workers at a Kilkenny hospital - a woman in her 50s and a man in his 40s - fell ill while working at St Luke’s General Hospital and have died. The woman was a member of the household staff, while the man was a healthcare assistant.

The woman and man were tested for Covid-19 and found to have contracted the virus. The woman died in the hospital on Wednesday and the man died at his home on Tuesday.

A spokeswoman for the Ireland East Hospital Group, which manages St Luke’s, confirmed the deaths to The Irish Times on Wednesday night, and said the group was “deeply saddened” about what had happened.

“We send our condolences to their families, friends and colleagues,” she said. “We have no further comment to make.”

It is understood that staff at St Luke’s were deeply shocked by the deaths. A moment of reflection was held on Wednesday to remember the man and woman and a guard of honour was formed at the hospital.

‘We have to get it lower’

The deaths of another 38 patients diagnosed with Covid-19 - including a 23-year-old - were reported by the National Public Health Emergency Team on Wednesday, bringing the total to 444. It is understood that three healthcare workers have died as a result of Covid-19 since the pandemic reached the State.

Of the 12,547 coronavirus cases confirmed to date, 2,872 cases are associated with healthcare workers.

Meanwhile, Professor Liam Glynn of the Medical school at the University of Limerick and a GP in Ballyvaughan, Co Clare, who has been mapping the progress of the Covid-19 virus, has said that while there has been some stabilising of the number of deaths, there are still a significant number of new cases every day.

“This is still a big number, we have to get it lower,” he told Newstalk Breakfast on Thursday.

The expansion of care into assessment centres means that GPs are now “stepping into the fire,” he said.

If the government had not acted when it did and how it did and if the public had not responded then the situation would have been far worse with many more deaths, he said.

The numbers have to be suppressed so that the health service is not overloaded, he added.

While a five per cent growth rate (down from 30 per cent at one stage), might seem low, he said, it was still “a big number” and 20 per cent of those people would have to be hospitalised and five per cent would need ventilators.

“We all need to get used to the changes, to the physical and social distancing measures until immunity is gained and that will either be through getting the virus and recovering or through a vaccine,” he added.