Coronavirus: Northern Ireland ‘at, or very close to’ peak of outbreak 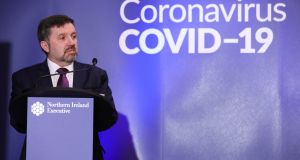 Northern Ireland is “at, or very close to” the peak of the coronavirus outbreak, according to the scientist responsible for modelling the virus’s progress.

Speaking at the Northern Executive’s daily press briefing, the Department of Health’s chief scientific advisor, Professor Ian Young, warned that the North “might continue to see a rise in deaths for another week or so”.

On Thursday the North’s Public Health Agency (PHA) announced that 18 people had died in the previous 24 hours.

It is the highest daily increase in the North since the outbreak began, and brings the total number of deaths among hospital patients with coronavirus to 158.

The health minister, Robin Swann, said it was “another deeply distressing day” and offered his condolences to the families of those who had lost their lives.

A further 113 people have tested positive for the virus, which causes Covid-19. A total of 2,201 cases have now been confirmed in the North.

Figures on the number of coronavirus-related deaths in care homes are due to be released on Friday.

Mr Swann said that as of Thursday morning, 45 patients with coronavirus were in intensive care and on Wednesday, 105 people suffering from the virus had been hospitalised. “That was the biggest number this week,” he said.

He appealed to the public to keep following the guidelines on social distancing and said the figures were “a grim wake-up call to anyone who is getting complacent.

“We must realise that we are in the fight against this virus for the long haul. We have done well so far in keeping our distance and following all the advice, but there’s still a long way to go.

“Please don’t let it slip now. Your actions now can save lives in the weeks ahead.”

The North’s Chief Medical Officer, Dr Michael McBride, said there were “some very difficult and challenging weeks ahead” and it was not yet known how long the peak would last in Northern Ireland.

He said that as the pandemic evolved, so too would the response, and it could mean the reintroduction of measures around containment, contact tracing and testing, as well as the introduction of further surveillance to establish how and where the virus is circulating.

Asked by reporters about the progression of the virus in Northern Ireland, Dr McBride said there was a “noticeable difference” in the way it was behaving in the North as compared to other parts of the UK.

Though it was “early days”, he said, the behaviour of the virus “was more similar to that in the Republic of Ireland.”

This was down to a range of factors, including the public’s adherence to the social distancing and public health guidelines, as well as, Prof Young said, Northern Ireland’s “significantly lower population density” and the age distribution of its population.

On Thursday the North’s education minister, Peter Weir, revealed the process for awarding GCSE and A level results in Northern Ireland in the absence of summer exams, which have already been cancelled.

Students’ results are to be calculated based on a combination of predicated grades from teachers, information already held by schools, and statistical modelling, as well as a standardisation process.

AS grades will be awarded as stand-alone qualifications but will not contribute towards A levels.

The health minister, Robin Swann, has asked the North’s critical care network to examine if the regulations can be amended to allow relatives to make end-of-life visits to loved ones with coronavirus who are in intensive care.

Earlier, the director of public health at the PHA told the Stormont Assembly’s health committee that the number of fatalities “will continue to rise for the next two or weeks” even though other statistics were improving.

However, he told the committee he believed “we can make a strong case for saying that Northern Ireland is actually in the strongest position of the five jurisdictions that we might compare ourselves to.”

He said this was “the view of the PHA, as of today, across the whole gamut of features of the Covid epidemic.”

That is not to be “complacent ... or not to say that couldn’t change even with 72 hours, but the methodology that has been followed here has been successful,” he said.

First Minister Arlene Foster, told BBC Radio Ulster on Thursday that the lifting of lockdown would be a “step by step process” and would be “led by the science”.

On Wednesday, the lockdown was extended in Northern Ireland for at least another three weeks.

At the meeting of the Assembly’s health committee on Thursday, Prof van Woerden faced questions in regard to coronavirus testing in Northern Ireland.

He said the focus was on “the gearing up of additional testing” and as capacity increased “we need to use that testing capacity and we need to test a lot more people in the community and that may be associated with slight changes to the lockdown approach.”

But he acknowledged there had been challenges, and said the Belfast laboratory “has had mechanisms break down” and there was “a global shortage of some reagents at times.”

Given that, he said, “we have done very well as a system to keep that ramping up rapidly, probably proportionately higher than the five nations we might compare against.”

Prof van Woerden said there was no backlog to testing, and 500 environmental health officers were available to help with testing, as were a number of university medical students.