Workers informed of restructuring plans during meeting at Ringaskiddy campus 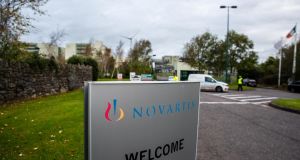 Trade union and business leaders have reacted with dismay to the news that pharmaceutical giant Novartis is to lay off up to 320 of its 550 strong workforce in Co Cork as part of a global restructuring.

Workers at the Ringaskiddy campus, which comprises both an Active Pharmaceutical Ingredient manufacturing unit and a Global Service Centre involved in procurement, were called to a meeting at the plant on Wednesday morning.

Novartis Ringaskiddy Ltd Managing Director, Shane Relihan broke to the news to staff that the company was seeking 240 redundancies in the API plant and a further 80 in the Global Service Centre.

Mr Relihan said that the redundancies will start to take effect from mid 2020 with 80 redundancies at the Global Service Centre expected to be completed by the end of 2021.

The redundancies at the Global Service Centre, which currently employs 180 people, will result from the relocation of a number of global service roles from Ringaskiddy to centralised operations centres in Europe and Asia.

Meanwhile, the 240 redundancies at the API plant will stem from the decision to consolidate its API manufacturing operations at the campus, resulting in the closure of one of its production buildings by mid-2022.

Novartis, which was formed through the merger of Sandoz and Ciba-Geigy, manufactures drugs for hypertension and cardiac problems at the Ringaskiddy plant which has benefitted from €850 million in investment over the years.

The Cork plant is one of 60 sites worldwide within Novartis Technical Operations division and the company is currently carrying out a review with a focus on centralisation to optimise capacity and lower costs through simplification.

Mr Relihan said it was important to stress the decision to seek the Ringaskiddy lay-offs was not a reflection of the performance of the workforce who have worked hard over the past 25 years to supply customers and patients.

“Novartis will work closely with our employees and representative groups to support everyone during this period ahead, providing severance packages and outplacement services.

“We will also work with our industry partners across the pharmaceutical industry cluster here in Cork to identify future employment opportunities in the area,” said Mr Relihan.

Most workers declined to speak to the media as they left the plant following the briefing.

However, one employee, Joe Barry from Glanmire said that news of the layoffs came as a shock to most staff at the plant.

“I just got a text yesterday to day there was bad news being announced - we knew there were changes coming down the line and things were changing in there but it was still a bit of a shock,” he said.

“It’s kind of a global thing - it’s the way the API pharmaceutical companies are going really - it’s all about smaller volumes and contract out the work because they say it’s cheaper to do it somewhere else.”

Mr Barry said the workforce knew that Novartis had been trying to sell the plant but many felt the decision by the company to recently invest in the Ringaskiddy campus had led many to assume everything was secure.

“I suppose it’s like factories down the years, Fords, Dunlops, gone with a swipe of a pen - we still have to see how it pans out - there are a lot of companies around the place recruiting so hopefully people will pick up something.

“But the age demographic may have something to do with that - we have an older demographic- a lot of fellows are here 25 years or more but maybe we might have a corporate change of policy, you have to look on the bright side.”

Siptu pharmaceutical sector organiser in Cork Alan O’Leary said the union was aware that Novartis was carrying out a review of its manufacturing operations including the fact it was seeking to sell the Ringaskiddy plant.

“We were formally told that the company was potentially selling the site and selling a manufacturing API plant can take time - it can take three or four or five years, so people never thought there was anything imminent.”

Mr O’Leary said that while Novartis was saying that the decision would have no immediate impact, it was creating huge uncertainty for workers - we are hoping to work with the company to try and minimise the cuts obviously.”

Mr O’Leary said Siptu, which represents 300 staff at the campus, would focus first on saving the jobs but if there are to be redundancies, the union would then work to ensure they were on a voluntary basis.

Cork Chamber chief executive Conor Healy expressed disappointment at the news, saying Novartis had been a major employer in Ringaskiddy for over 25 years and a major player in helping Cork establish a reputation as a major pharma centre.

Tánaiste and local Cork South Central Fine Gael TD Simon Coveney said the announcement was a “significant blow” and would be “very difficult for the highly skilled workers” and their families.

“I’ve spoken to the Minister for Business, Enterprise and Innovation, Heather Humphreys, as well as the IDA to ensure all available supports from state agencies are now open to the staff affected by this Novartis announcement,” he said.

“The staff are highly skilled in the competitive pharmaceutical industry and the state agencies will use the 3-year timeline laid out by Novartis to work with the company and the workers to protect employment.”

Fianna Fáil leader and fellow Cork South Central TD, Micheál Martin said that Novartis had become one of the biggest employers in Ringaskiddy since the 1990s and the jobs cut announcement was “devastating” for the region.

“The job losses are particularly disappointing as Novartis in Cork was high-end manufacturing and I hope all efforts are made by government and the IDA to prevent as many job losses as possible,” he said.

“Every effort should be made to relocate those that lose jobs and to seek an alternative company to invest. Extra efforts have to be made in the far more competitive environment globally.”

“It is important now, that management engage with staff to outline a clear picture for those who face into these jobs losses and that supports from the organisation and the government are provided immediately.”

Minister for Business, Enterprise and Innovation, Heather Humphreys said she was shocked by the news and said her department had received no notification of the announcement despite being in close contact with all multinationals.

“We didn’t have any notice of this ..... sometimes decisions are made in boardrooms, not in Ireland and these decisions have an impact on Ireland and on the jobs here. Ultimately this is a decision for the company.”

Ms Humphreys said she was “extremely disappointed”, particularly following so soon after the news from Molex in Shannon in Co Clare that it is to close with the loss of over 500 jobs.

“The reality is that Ireland is a very open export-orientated economy, and we are operating in a competitive global market and this can sometimes mean that decisions taken by firms abroad can impact on their operations here.”