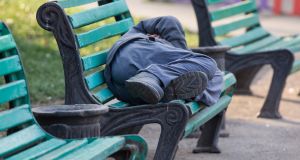 Unless rough sleepers were clearly visible on the streets, the authorities and the public seemed unaware of the homelessness crisis, Mark Kane of North West Simon said.

Homelessness has become “a silent crisis” reaching into Ireland’s towns and villages while the focus remains on the big cities, according to the recently appointed general manager of North West Simon.

Mark Kane described the Housing Assistance Payment (HAP) as “a vehicle for the Government to replace social housing” and said that from January to July this year, the organisation had encountered 141 homeless children in the northwest – 53 in Sligo, 54 in Leitrim and 34 in Donegal.

North West Simon, which operates in Donegal, Leitrim and Sligo, dealt with 131 cases, 57 of them family units in this period. Mr Kane estimated that the figures represented a 25 per cent increase in 12 months.

“It is happening down here as well and the Government really needs to pay attention to that. It’s not just in the big cities,” he stressed.

North West Simon is holding clinics in Tubbercurry and Carrick on Shannon and has found that as rents increase in larger urban centres, people are moving to rural areas. “We get six or seven people arriving over an hour and a half or two hours when we hold these clinics,” said Mr Kane.

“People who have spent all their lives in towns are finding themselves in rural areas where [they are] without transport and access to services they are becoming even more isolated,” he explained.

Vulnerable people including those on social welfare or on low incomes are finding themselves squeezed out of the tight rental market as rents soar, he said. “There are a few reasons. If you look at the wider picture, there is no social or affordable housing. People who would once have taken out a mortgage are no longer doing so. They have now resigned themselves to rent for nearly the rest of their lives.”

Mr Kane said that unless rough sleepers were clearly visible on the streets , the authorities and the public seemed unaware of the homelessness crisis. “And we have come across people in tents in the sand dunes at one local beach, which I better not name in case they are moved on, and in cars and derelict buildings”.

But he stressed that homelessness was also about those living in B&Bs, hotels, emergency hostels and overcrowded family homes. The Simon executive said he knew people who had looked for accommodation in Leitrim and could not find it, even though they were working.

“Even at that level it is biting. And people who worked all their lives and raised their families are finding themselves extremely vulnerable and have to decide whether to pay the high rent and do without heat or fuel. These are the choices people are waking up to.”

Mr Kane believes the problem is growing steadily in the northwest “and will get worse before it gets better” as people compete for limited accommodation.

Mr Kane said a trigger like a death or a relationship breaking down could make someone at risk of homelessness.

“For example, we had a woman whose husband died. The couple had been living in a place for eight years but his name was on the tenancy agreement and now she has to move out. The rents are so high that when she went out into the market she found she could not afford anything. All it takes is one knock and people find they may become one of those statistics.”