Stigma of homelessness: ‘They couldn’t hide the disgust on their faces’ 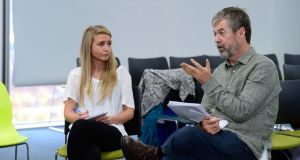 A young woman who has gone from living on the streets to studying for a third-level degree, has spoken of the need for hospitals to have more empathy when dealing with homeless people.

The woman, who spoke under guarantee of anonymity at the Irish Street Medicine Symposium which took place in Dublin at the weekend, said staff couldn’t hide their disgust when she and her partner attended the emergency department of a Dublin hospital within the past two years.

She was living on the streets and recalled the cold, wet night when she had to call an ambulance for her partner who had developed hypothermia and lost consciousness. They were both brought by ambulance to the hospital’s emergency department.

“We were brought in and the doctors in there and the nurses, it was a horrible experience. They were awful. We were so dirty, you can imagine; we were smelly and dirty. They treated us so bad. They couldn’t hide the disgust on their faces, which was very, very difficult because we were vulnerable and we needed their help.

“At the start I actually felt sorry for them because they had to deal with us being so dirty but there was no respect, there was no anything. Not everybody was like that, but the doctors that dealt with us and the nurses especially, wanting us to stay in a certain part and pulling the curtains around us, making sure our clothes were taken away because they smelled so bad. These are the little things that stay with me, they are still with me,” she said.

“We were both homeless and he was really very sick. I couldn’t tell you how bad it makes me feel now,” she added.

Her partner recovered and, after years of living on the streets with a serious drug addiction, they are now both clean and planning a new life.

She has credited the Safetynet Primary Care service – a medical charity that delivers free primary care services to marginalised groups – with saving her life. She described the walk from the tent she was living in to the Safetynet Primary Care mobile health unit, which provides free healthcare to rough sleepers, as the 20-minute journey that saved both her and her partner’s lives.

With the support of the Safetynet service, she and her partner were able to access a methadone treatment programme and this marked the start to their recovery.

She is now living in a long-term hostel and attending university.

“I wanted to go to college, for me college was my recovery… I just want to go and learn and just be me and not care what people think.”

Reflecting on her experiences with mainstream hospital services, she said it has made both her and her partner fearful of having to attend an emergency department again.

Asked what needed to change, she simply wondered if bedside manner and being friendly, perhaps offering someone a cup of tea, could be taught in medical and nursing schools.

The founder of Safetynet Primary Care said the stigma was a societal one that “gets particularly played out in the hospital” but not in all hospitals.

“Hospitals are under such pressure because they are being swamped with patients and they are very busy. When you are that busy, the pressure is much more significant. Therefore, what happens is you start losing your humanity and you start then resorting to stigma,” he said.

The GP, speaking on the margins of the symposium, explained that homeless people felt “embarrassed” and “ashamed” and often left hospital earlier as a result. This can lead to them getting sicker and requiring re-admission.

“We have to address attitudes and that starts in education and moves on to creating a culture of acceptance … hospital administrators need to accept responsibility for the culture of the service they provide, they have to recognise that culture is a key determinant to access to health,” Dr O’Carroll said.

Dr O’Carroll pointed to a number of examples of best practice such as the Guide clinic in St James’s Hospital which offers free STI, HIV and infectious disease services.