Did the RIC commemoration controversy impact on Election 2020? 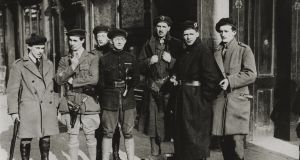 The general election was bookended by two episodes which show how remembrance of the State’s past remains current affairs.

Many took grave offence in both cases to what they regarded as a distortion of Ireland’s past.

Correspondence from the Department of Justice and the Department of the Taoiseach in relation to the RIC controversy recently released to The Irish Times under the Freedom of Information Act reveals the extent to which Fine Gael supporters felt queasy about commemorating those who fought against the IRA in the War of Independence.

“It saddens me to say this intention to honour the DMP/RIC will undo the great work Fine Gael has done to date . . . you are pushing people into voting for FF [Fianna Fáil] in the next election,” wrote one party supporter.

Another correspondent commented: “I have always voted for you in elections but feel I can no longer do so due to this event.”

A third declared: “I have been a supporter of Fine Gael all my life but I think this proposal is really crazy.”

The impact of this controversy on the outcome of the election is hard to gauge.

Minister for Justice Charlie Flanagan, who instigated the commemoration, was re-elected in Laois-Offaly, albeit with a diminished first preference vote.

Mr Flanagan declined to be interviewed for this article but made a pointed reference in a tweet to the video showing Mr Cullinane’s remarks: “This is where we are.”

Outgoing Fine Gael TD Noel Rock, who lost his seat in Dublin North-West, said the RIC commemoration was an issue on the doorsteps.

“No question. It was a big issue early in the campaign when it was fresh in the memory,” he said.

“I don’t know if it was a factor [in the party’s performance]. We did lose votes, but I don’t think anybody can be definitive [about] what lost the votes. Many would proffer the idea that it cost us votes, but nobody can say with any certainty.”

A counter-argument is the success of two Fine Gael candidates in the election who were vocal in their support of the RIC commemoration.

Neale Richmond, the party’s Seanad spokesman on Brexit, was elected in the middle-class Dublin Rathdown constituency, one of the few constituencies resistant to the Sinn Féin surge.

However, even here the issue exercised voters . “I have no doubt it unfortunately did have an impact on some people’s campaigns but there were far bigger issues. My views were fairly well known.”

Mr Richmond, who is a member of the Church of Ireland, added: “After 10 years of running for office, I was disappointed to experience my first bit of overt sectarianism at a door that also included some vitriol about the planned commemoration.”

Fine Gael’s Frank Feighan was elected in the Sligo-Leitrim constituency, where Sinn Féin’s Martin Kenny topped the poll. Not only did Mr Feighan support the commemoration in a spirit of reconciliation, but he also favours the State joining the Commonwealth.

He does not believe the issue cost Fine Gael votes, but says: “Sinn Féin used it as a rallying call. It was never about the Black and Tans but that was the message that went out there. I asked the question: ‘Are we really ready for a united Ireland if we can’t deal with issues like this?’”

DCU historian Dr William Murphy observed Sinn Féin sought to exploit the Easter Rising centenary commemorations in 2016 by calling for a “new Rising”, but this had little effect.

“That said, the atmosphere generated by the commemorations may have encouraged some people to be more open about the prospect of radical change now, and it may even have emphasised for them that Sinn Féin might be a vehicle for radical change.”

UCD professor of history and Irish Times columnist Diarmaid Ferriter said he believed the RIC commemoration row aided the mayor of Clare Cllr Cathal Crowe, a vocal opponent of the event who took a seat for Fianna Fáil in Clare in the election, but that is all.

“I am sure it came up occasionally on the canvass but it did not seem to work its way into the formal election debates.”

Prof Ferriter, a member of the Government’s advisory group on commemorations, said the next administration will need to “tread carefully” in the knowledge that the commemorations can be “emotive and divisive and the last thing we need is distortion and simplification of history or online bile and propaganda”.

He added: “The State does not have to apologise for how it came into being but it does need to acknowledge how that process subsequently ruptured the country; and it does not need to take on the task of formally memorialising those who fought to suppress the independence movement.

“Rather, it needs to encourage debate and research into the multiple allegiances and legacies arising out of the events of 100 years ago.”

Advisory group chair Maurice Manning reiterated his view that it would be “shameful” if the tolerance that has marked the Decade of Commemorations to date was lost following the RIC controversy.

“We believe that the fundamental framework and principles are the right ones, that we will continue to work within these.”