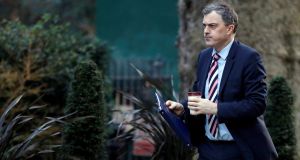 Julian Smith, it may not be generally known, as well as playing a pivotal role in restoring Stormont, is married to the television producer Amanda Wilson, one of the creators of the hugely successful BBC series Strictly Come Dancing.

However, according to several sources it seems he wasn’t prepared to dance to the tune of UK prime minister Boris Johnson, and that was the reason he was sacked.

After a long series of lacklustre British secretaries of state, Smith was seen as a politician who was proactive, creative and muscular in getting things done.

This included ensuring that the victims of historical institutional abuse would get the compensation that they had been left waiting for because of the previous political paralysis.

Margaret McGuckin of the victims’ group Savia expressed not only regret but astonishment that he was sacked. And that was a general reaction yesterday after Smith was told by Johnson to pack his bags and quit his palatial home at Hillsborough Castle and his offices on the Stormont estate.

His successor, Brandon Lewis, a former Tory chairman and a Remainer turned Leaver, has a hard act to follow.

After Christmas there was speculation that Smith was unpopular with Johnson’s chief adviser, Dominic Cummings, and would be ousted but subsequently there was a sense that restoring Stormont would ensure he remained in the cabinet.

Spoke with @JulianSmithUK a short time ago to thank him for his help in getting devolution restored. We may not have always agreed (we did sometimes) but his dedication to the role was incredible. Best wishes to him and his family. Always welcome in Fermanagh. https://t.co/2hUzOWmRBS

When Johnson came to Stormont to bask in the success of getting the powersharing institutions back up and running he was asked about Smith’s future. He delivered what now appears as a calculatedly ambiguous response when he said he had “done a great job and he certainly has a bright future”.

But not as secretary of state. Johnson’s encomium was as valuable as a Premier League manager facing relegation getting a statement of confidence from his chairman.

That Smith should be first on Johnson’s St Valentine’s Eve Massacre list has raised questions about his attitude to Northern Ireland. For the first time in many years the North gets a Northern Secretary who can knock heads, and he is out the door after just 204 days – the second shortest stay as Northern Secretary after Francis Pym’s record of just 92 days.

But during that brief period Smith got far more done than all Conservative predecessors in that post since 2012, Karen Bradley, James Brokenshire and Theresa Villiers.

There has been speculation that one of the reasons he was dismissed was because in the New Decade, New Approach agreement to restore Stormont – the deal he and Minister for Foreign Affairs Simon Coveney published last month – there was a commitment to publish within 100 days legislation to implement the Stormont House Agreement to address legacy issues.

That December 2014 Stormont House deal included a proposal to establish a historical investigations unit that would investigate outstanding Troubles-related killings. Such a unit also would probe disputed killings by British soldiers and the RUC.

There was a feeling that this was at variance with the commitment by the prime minister in December that he would “bring forward proposals to tackle vexatious claims that undermine our armed forces”, and by other previous comments by Johnson.

Some reports suggested Smith had “bounced” Johnson and the UK government into signing up to this element of the deal, which could be viewed as undermining his apparent wish to protect former British soldiers from Troubles-related charges.

A number of senior sources expressed great scepticism about this line, suspecting vindictiveness was a factor in his dismissal, a claim made by former taoiseach Bertie Ahern when speaking on RTÉ yesterday.

There was the strong suspicion that Smith lost his job because he was a Remainer and because he was his own man and that did not suit Downing Street, which wanted compliant men and women, particularly during the negotiations on how Brexit will happen.

“I don’t think it had that much to do with legacy and British soldiers. I think he was just too independent for Boris and [Dominic] Cummings,” said one source. “The legacy argument is an excuse rather than the reason.”

Said another well-placed figure, “You have to remember Julian Smith was Theresa May’s chief whip; he opposed Brexit; he never stood a chance.”

1 Coronavirus: Almost 60 new cases recorded in Italy as two die
2 Ryanair’s Michael O’Leary under fire for comments on Muslim men
3 Archbishop: Sex abuse of women by L’Arche founder ‘reprehensible’
4 Blue Brexit passports made by European firm to be issued from next month
5 Weekend of floods, sleet and high winds in store as weather warning issued
Real news has value SUBSCRIBE