Operation will have major impact on leading drug supplier in Cork, gardaí have said 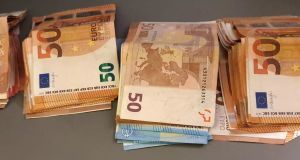 Some of the more than €20,000 in cash that was seized by gardaí and Cab officers during searches of a number of properties in Munster on Thursday. Photograph: An Garda 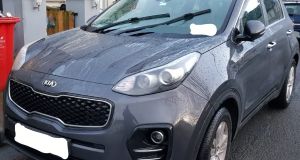 A Kia Sportage which was seized during the raids on Thursday. Photograph: An Garda 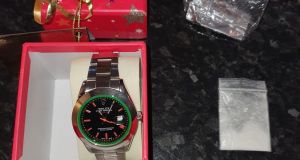 A Rolex watch seized during the searches. Photograph: An Garda

Officers from the Criminal Assets Bureau (Cab) have seized property, cash and documentation in a series of raids in west Cork, Cork city and Tipperary targeting the activities of a drug dealing gang operating in west Cork.

Gardaí have expressed confidence that the raids will have a major impact on the activities of a leading drug supplier in Co Cork.

Chief Supt Con Cadogan said the operation, which involved over 120 officers raiding 21 premises in West Cork and Cork city, was the result of a 12 months investigation into the operations of one of the major drug gangs in the area.

“I think we had a very successful day here in West Cork today and I have no doubt it will have a very significant impact on the distribution, sale and supply of drugs in West Cork and, indeed, throughout Cork county,” he said.

The raids, which lasted several hours, began when officers searched eleven residential dwellings including a rental property near Ballinascarthy in West Cork. Four business premises, including a garage in the Bandon area, were also searched.

Gardaí also searched the offices of a number of professional people including those of solicitors, accountants and estate agents as part of the targeted operation against a man in his late 30s and his criminal associates.

Among other locations searched was a room in a hotel where the man, whom gardaí believe is involved in supplying cocaine and cannabis in West Cork, regularly stays.

Officers also carried out a raid in the Roscrea area of North Tipperary as part of the same investigation into the activities of the target.

Gardaí have been looking at the suspect for over a year as he is not working and in receipt of social welfare and yet lives a lavish lifestyle, driving top of the range cars and taking his family on expensive holidays.

According to Garda sources, the man has a set up an elaborate drugs supply network using both Irish and Eastern European couriers to deliver cannabis and cocaine to smaller scale dealers in West Cork.

Gardaí seized a total of six cars with a total value of € 170,000 from the man and his relatives and associates while they also seized € 22,500 in cash and froze four bank accounts, containing a further € 26,000.

CAB officers are also understood to have seized mobile phones and laptops at a number of the locations as they seek to trace the movement of large sums of money they believe are the proceeds of the man’s drug dealing.

Two men were arrested by gardaí during the raids - one on foot of a court bench warrant and one for possessing drugs for sale or supply for an offence which occurred on a previous date.

Both men, one of whom is Irish and one of whom is Eastern European, are in their 20s and both were arrested in the Bandon area and are currently detained at Bandon Garda station.

Gardaí believe that the target of their raids is laundering the proceeds of his drug dealing through a number of businesses in the West Cork area which are run by relatives and associates.

According to Chief Supt Cadogan today’s raids emanated from a preliminary investigation conducted by a divisional asset profiler in West Cork who later assisted the CAB in their work on the suspect.

It is the second major raid by CAB officers in the West Cork Division in the space of a few weeks and follows an unrelated and separate raid on the home of a 50 year old man in Aherla in Mid-Cork towards the end of January.

Gardaí suspected the man was involved in money laundering for an international crime gang and they seized a number of cars, three high value watches and €1,400 in cash as well as phones, laptops and documents.