New Labour TD says he might run for party leadership 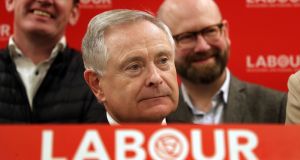 Brendan Howlin amongst party colleagues as he announced that he will not contest an upcoming labour leadership competition. Photograph: Nick Bradshaw

One of Labour’s newly-elected TDs has suggested he is considering running for the party’s leadership.

Duncan Smith, elected in Dublin Fingal, said he would speak to constituency colleagues over the weekend about a potential bid.

“I’m not ruling anything out,” he said, when asked on RTÉ’s Today with Sean O’Rourke if he would be a contender.

“There are people I respect in the party, in the local organisation that I want to discuss that with.”

Mr Smith added that it was “unlikely at this stage” that he would enter the leadership race but repeated: “I’m not ruling anything out.

The 36-year-old former parliamentary assistant to the ex-Labour TD for Fingal Brendan Smyth said he didn’t have a preference for any of his colleagues already being linked with taking over from Brendan Howlin.

Mr Howlin announced his resignation on Wednesday after another disappointing election for Labour. The party won six seats in the general election, down from a high of 37 back in 2011.

Labour’s executive board will meet on Saturday, February 15th, to approve the arrangements for the election of a new leader.

Only party TDs are eligible for the post, and candidates must be nominated by either two TDs (they can nominate themselves) or five constituency councils. All members of the party have a vote.

It is expected that the Tipperary TD Alan Kelly will be a candidate, though there was no confirmation of his intentions on Wednesday night.

1 Sweden should have done more to combat coronavirus, health chief says
2 With Lincoln looking on, the crowd dropped to their knees as 7pm approached
3 Luke ‘Ming’ Flanagan bares his bottom half to European Parliament
4 Coronavirus: 25% of new cases arising in the community with no known link to other cases
5 Trudeau lost for words when asked about clearing of protesters for Trump photo
Real news has value SUBSCRIBE