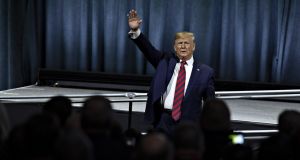 US president Donald Trump’s image makers have chosen to make him appear as narcissistic and “probably understand this sort of behaviour has certain advantages”, a QUB researcher said. Photograph: Daniel Acker/Bloomberg

Narcissists think it is all good for them – and they could be correct.

New research from Queen’s University Belfast shows that people with grandiose narcissistic traits are more likely to be “mentally tough”, feel less stressed and are less vulnerable to depression.

While society may consider narcissism a negative personality trait, Dr Kostas Papageorgiou at the Northern Irish university’s school of psychology has concluded in two new academic papers that it may have benefits.

He divides narcissism into two main dimensions: vulnerable narcissists who are more likely to be more defensive and view the behaviour of others as hostile, and grandiose narcissists who usually have an overinflated sense of importance and a preoccupation with status and power.

“Individuals high on the spectrum of dark traits, such as narcissism, engage in risky behaviour, hold an unrealistic superior view of themselves, are overconfident, show little empathy for others and have little shame or guilt,” said Dr Papageorgiou.

He found from independent studies involving more than 700 mostly adults that grandiose narcissism can increase mental toughness and offset symptoms of depression and that narcissists can view their lives as less stressful.

“If you are a narcissist, then you think you deserve the world. You face a lot of stressful situations in your attempt to get what you deserve and during that process you become more resilient, more mentally tough,” he said.

He said that his research was not saying that grandiose narcissism was a “good characteristic” or trying to advocate it over modesty but that human nature should not be perceived as “totally bad or totally good”.

Dr Papageorgiou said that he could not comment on Donald Trump, who has been accused of displaying acute narcissism, but noted that even the US president’s team of image makers has chosen to make him appear as narcissistic and “probably understand this sort of behaviour has certain advantages”.