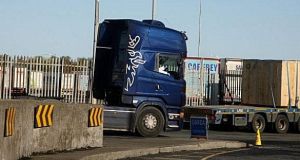 Gardaí stopped the man’s truck immediately outside the Dublin Port entrance when he returned to the county on Saturday. Photograph: Pádraig O’Reilly

A Northern Irish man suspected of taking part in the trafficking of 39 migrants who were later found dead in a trailer told Belgian port authorities he was transporting biscuits, police there have said.

The man, who is currently in custody in Ireland following his arrest on Saturday, is being sought by British police on suspicion of transporting the trailer containing the victims to the Belgian port of Zeebrugge.

The trailer was then transported to the UK by ferry before being driven to Essex.

It was opened up and the bodies of 31 men and eight women, most believed to have come from Vietnam, were found inside.

Contrary to earlier reports that the victims froze to death, it is now believed the main cause of death was suffocation.

According to the Belgian public prosecutors office, the truck driver at Zeebrugge told port officials he was transporting biscuits and therefore the truck’s refrigeration unit did not need to be switched on.

The Belgian authorities said it was not yet clear if the man believed this and said it remained possible he did not know his trailer contained people.

The man, who is aged in his 20s, was arrested by armed gardaí when he arrived in his truck at Dublin Port on Sunday, having spent the previous three days in France.

Belgian police said a European arrest warrant had already been issued for his arrest in relation to the trailer deaths.

This is expected to be executed shortly. Both the UK and Belgian police say they are anxious to speak to him.

On Sunday, Essex police confirmed he was a “person of interest” in their investigation. The truck he was driving, understood to be the same one that was picked up on CCTV at Zeebrugge, has been seized for examination by the Garda and is being held in a vehicle depot in Santry, north Dublin.

Another Northern Irish truck driver, Maurice Robinson (25), appeared in a UK court on Monday charged with 39 counts of manslaughter and conspiracy to traffic people.

He is alleged to have been with the trailer in Essex when the bodies were found in the back.

During a brief court appearance a prosecutor told the court the conspiracy charge relates to “a global ring” involving “the movement of a large number of illegal immigrants into the UK”.

Three other people, all originally from the island of Ireland, have been released on bail following their arrest last week by investigators.

Authorities believe the trailer, which was leased to an Irish haulier, was brought to Zeebrugge from an unknown location by a truck which was registered to the same haulier.

It arrived at the Belgian port on the afternoon of Tuesday, October 22nd. The trailer, minus the truck, was then put on a ferry to Purfleet in the UK where it arrived in the early hours of Wednesday.

It was picked up 40 minutes later and driven to Grays in Essex by another truck which had come over from Dublin the previous weekend.

At 1.40am that morning police were notified about the bodies and a murder investigation began.