Part of roof collapsed in blaze at Taly’s in Lissycasey 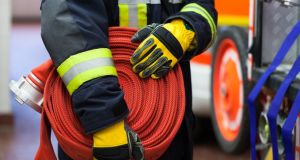 Seven units of Clare County Fire and Rescue Service from Kilrush and Ennis stations were mobilised, along with water tankers and an aerial platform. Photograph: iStock

A coffin-maker’s factory has been destroyed in a major fire in Co Clare, which was fought by seven fire brigades.

The blaze was reported atabout 9am on Friday at Talty’s, the well-known joinery business at Crown, Lissycasey.

Seven units of Clare County Fire and Rescue Service from Kilrush and Ennis stations were mobilised, along with water tankers and an aerial platform. However, the building was already ‘well alight’ by the time the emergency services arrived , and part of the roof had already collapsed.

There were no reports of injuries. Fire crews had brought the fire under control by Friday afternoon. However, steel roof-beams had buckled, while one car and a forklift were also destroyed.

A digger tore down remaining sections of the roof to make the building safer. While there is no immediate explanation for the fire, it is understood to have begun accidentally.

A large amount of timber was destroyed in the blaze at the coffinmakers, which was set up over 40 years ago and makes hand-made coffins, caskets, urns and grave markers for undertakers throughout the island.

“The Talty family are the nicest people you’ll ever meet, all of them. There are a few businesses run by different members of the family and they all work hard. They always did. It’s awful to see this here today and it went up very quickly. I hope they can start it up again but it will be tough,” said a neighbour.