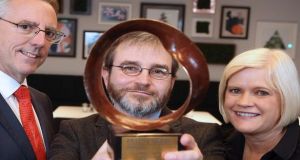 Distinguished mathematician and researcher Dr Mark McCartney, who is based at Ulster University, Jordanstown, has been honoured as this year’s recipient of the Maths Week Ireland Award for his contribution to raising public awareness of maths.

Dr McCartney is a senior lecturer in mathematics and has a strong interest in mathematics education – he was an early promoter of Maths Week Ireland as an all-island initiative.

He has made significant contributions in promoting and recording the history of mathematics which has led to a body of important work on mathematicians (and mathematical physicists) – in particular those with Irish connections.

The award is presented every year during Maths Week, which is run with partners including Science Foundation Ireland; the Department of Education and Skills, the Department for the Economy in Northern Ireland, the technology firm Xilinx, universities, institutes of technology, libraries, schools, training colleges and employers.

Maths Week co-founder Dr Sheila Donegan said: “Through his internationally recognised work, Mark McCartney has made an enormous contribution to the field of mathematics and has passed on his knowledge and experience to a whole generation of students and the wider public.”

Speaking at the awards ceremony, Dr McCartney said: “It’s such an honour to be given this award and I’m truly grateful to everyone at Maths Week Ireland. They have done so much to bring maths to the forefront in everyday life and highlight its importance and contribution to the world – past, present and future.”