Derry after Lyra McKee: ‘People are thinking enough is enough’

In the wake of the fatal shooting of the journalist, there are some signs of change

A clip taken from 'Letter to my 14 year old self', a short film written by Lyra McKee, in which McKee explains to her younger self what it will be like to come out to her mother aged 20. Video: Lyra McKee/Stay Beautiful Films 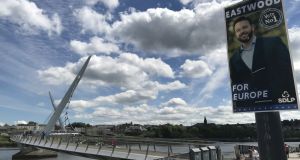 Sinn Féin dropped five seats in Derry to put them on 11 seats and on a par with the SDLP, who gained three

For Maureen Wilkinson, the fatal shooting of Lyra McKee brought back old memories.

“The same thing happened to my brother,” she says. “He went out that night to do his work and he didn’t come home.”

Emmett Shiels was delivering pizzas when he was shot and killed by the INLA in the Creggan area of Derry in 2008.

“That was two innocent people shot dead, a journalist and a pizza delivery boy,” she says. “I’ve lived in Creggan all my life. It hasn’t changed since Emmett was killed.”

Yet in the weeks since Ms McKee’s death, there has been much talk of change, following the 29-year-old writer and journalist’s shooting as she watched a riot in Creggan on April 19th. Her death is blamed on the dissident republican group the New IRA.

Many had hoped that the change would have started in last month’s local elections.

In particular, the candidacy of Gary Donnelly, a sitting Independent councillor and former spokesman for the dissident republican 32 County Sovereignty Movement, was cited as a potential indicator of the support – or otherwise – for dissident republicans in Creggan.

That Donnelly – a poll-topper previously – was re-elected, surprised few. He increased his share of the vote to almost 1,400 first preferences – an endorsement, Donnelly said, of his constituency work over the last five years.

“Gary is seen, particularly in Creggan, as a diligent worker within the community, rather than somebody who is involved in political violence,” says veteran campaigner Eamonn McCann, who was elected on behalf of People Before Profit.

In a post on social media, Donnelly said Ms McKee’s death had been “wrong” and he “would plead with those behind this attack to desist from any further attacks and seriously consider the consequences of their actions”, but he refused to take questions .

Marisa McGlinchey, assistant professor of political science at Coventry University and author of Unfinished Business: The Politics of Dissident Irish Republicanism, says Donnelly’s condemnation was significant. “I think it helped him that he took that strong stance even though he comes from within that dissident base.”

Last Friday’s European Parliament election was a chance for voters to have their say on Brexit. Derry is staunchly pro-remain, returning the fourth-highest remain vote in the UK. So close to the Border, the uncertainty caused by Brexit disturbs.

On Derry’s Peace Bridge the day before the election, one voter pointed to the plaque commemorating the bridge’s opening – it is emblazoned with a European flag.

“Look at all the help we’ve had here from the EU,” he said. “In the likes of Derry, there’s far more money comes out of the EU for us than goes in.”

For some, signs of change are seen in the election of Alliance Party leader Naomi Long to the European Parliament when she gained 46,453 transfers from Derry’s Colum Eastwood, the leader of the SDLP, compared to the 24,236 transfers Eastwood delivered to Sinn Féin’s Martina Anderson.

In truth, however, few of those votes will have come from Creggan.

Less than a week before Ms McKee was killed, the play Don’t Shoot My Wane, Shoot Me!

The play, which explores issues around paramilitary-style shootings, was supported by the EU’s Peace IV programme.

A young man who is to be shot and a spokesman for those behind the threat are brought face to face; at the play’s end, the audience must vote on the outcome.

Wilkinson plays a community worker and moderator. Each show, she counts the votes.

Each time, the verdict is overwhelmingly against the shooting.

Among the actors is Drew Sperou. The 17-year-old, from Creggan, plays the victim of a paramilitary-style shooting.

“I was on social media [after the killing] and there were a lot of posts from people saying it was wrong. I think that’s a sign of progress, because it’s the community coming together as one and seeing the bigger picture.”

Mediator Michael Doherty agrees. “I think the view against the Saoradh group and the [New] IRA has changed dramatically. People are now beginning to realise what has been happening . The problem is, it’s looking like they’re not listening to anybody.”

McGlinchey points out that Saoradh – widely viewed as the political wing of the New IRA – does not take its legitimacy from popular support.

Condemnation from inside their own ranks is the most important thing: “They cancelled their Easter Monday commemoration in Derry, so they clearly felt that pressure.”

Yet Derry has been here before; not least after the 2008 death of Shiels: “It was down to wee thugs who were given guns by older men,” says Wilkinson. “The bottom line is: these older ones have to be stamped out.

“There’s still that mentality in Creggan – you don’t tout, regardless – but I think in the case of this wee girl getting shot, people are thinking, enough is enough.”

The police have made repeated appeals for information, reassuring potential witnesses that they will be protected.

“There’s an element of fear within the community,” says Doherty, “because these people are capable of taking people out.”

“I totally get that,” says PSNI Chief Inspector Jonny Hunter, who says that there has been a “sea change” in attitudes in Creggan since the shooting of Ms McKee.

“I walked along Central Drive [in Creggan] this morning in a yellow jacket and a young child, probably about 13, lifted a brick to throw at us and everybody on the street was aghast.

“The mother was mortified and took her child offside and we just continued on. Kids were going to school, the crossing man was helping them across the road, it was normal.”

It is clear much work remains to be done. A security alert – the second this month – at a polling station in the Galliagh area of Derry was described by the PSNI as an “elaborate hoax”, which led to police going into the area where they were attacked with petrol bombs.

“The only way to really deal with the issues is to sit down and come up with new solutions,” says Green. “The solutions of the past are not working today. Politicians and others need to go the next step.”

High on lamp-posts, the no-longer needed European Parliament election posters watch over Derry’s walls. They may never be seen again in the city. But for now, in the eyes of many, they offer hope.