Mannix Flynn was critical of People Before Profit supporters behaviour at the RDS Count Centre following his election to Dublin City Council following a recount. He compared them to both Isis and the Taliban. Video: Bryan O'Brien 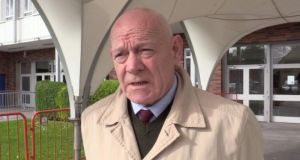 In an impassioned speech following his win, Mr Flynn said the experience of dealing with People Before Profit during the recount process has been “traumatic” and he compared the party and its supporters to the “Taliban or Isis” in their behaviour at the count centre in recent days.

“People Before Profit have no regard for democracy” and had sought to “undermine the democratic process”, he said.

Mr Flynn said the party were perfectly entitled to call for the recount, which resulted in the margin between himself and Ms Mooney reducing from 12 to eight votes, but said they had unfairly questioned the integrity of the count staff and had “behaved in a very hostile way”.

He commended the count staff and also the gardaí for their calm behaviour when People Before Profit supporters confronted Minister for Housing Eoghan Murphy at the count centre on Sunday and staged an impromptu protest.

Mr Flynn accused the party of abandoning their Marxist and Leninist principles and said he was relieved the party would not have a significant presence on the city council as it would have “blackguarded” the council. The party and its leadership “need to grow up”, he said.

“They need to grow up and Richard Boyd Barrett and the likes of Bríd Smith should lead here or what will happen to them eventually is what happened to the Sinn Féin party.”

He added that he was delighted to be elected and would be happy to represent People Before profit members as constituents on the council.

Ms Mooney was not in the count centre for the final declaration. Her election agent Kieran Allen, who attended the recount said “I don’t carry a suicide vest and I despise Isis” and described Mr Flynn’s comments as “ridiculous”.

“Mannix is obviously a very bitter man. He should be celebrating his victory.”

Mr Allen said he had merely been seeking an explanation from count officials of how surpluses were being transferred. “I don’t think asking questions equates you to the Taliban or Isis.”

He added that people has every right to protest.