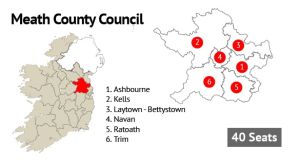 A day of firsts concluded Sunday at the count centre in Simonstown but uncertainty is set to continue over the ultimate make-up of the 40 seat county council in Meath with one councillor becoming the first woman to win seats in two areas.

Sharon Keogan (Ind) topped the poll in Laytown/Bettystown LEA and was also elected on the 10th count in Ashbourne LEA but under current council rules must now decide which area to represent with the other seat filled by a nominee co-opted through a vote by the other members.

However Cllr Keogan is determined to represent both areas herself and may take legal action on the issue.

“I’ll do my damndest to hold the two seats,” she said.

Another history maker was Yemi Adenuga (FG) becoming the first Nigerian woman to take a seat on Meath County Council. A star of Gogglebox Ireland she was elected in Navan LEA on the 11th count and is looking forward to her new role.

Emer Tóibín also made history in Navan, winning a seat for Aontú the fledgling party founded by her brother Peadar Tóibín, the ex-Sinn Féin TD.

Delighted brother Peadar said it was a proud moment, seeing his sister elected in his own hometown.

This is the third seat for Aontú nationally, as the party secured places on councils in Wexford and Cavan.

However Mr Tóibín said he had “no doubt the majority of our votes would’ve ended up in a Sinn Féin polling box if they hadn’t forced me out”.

The advent of Aontú, which ran candidates in five LEAs, cut into the Sinn Féin vote with five sitting Sinn Féin councillors losing their seats, including Sinead Burke who is Sinn Féin’s designated general election candidate in Meath West.

The Social Democrats gained their first seat on Meath County Council with Ronan Moore being elected on the sixth count in Trim LEA.

The election saw a return to the council for Labour with the election of first-time candidate Annie Hoey. The past president of the Union of Students in Ireland was elected on the ninth count in the Laytown Bettystown Area.

Fine Gael and Fianna Fáil are still the dominant parties on the council.

Fine Gael lost one seat in the election and is tied on 12 seats with Fianna Fáil which made a gain of 2 seats.

While there was an increase in the number of Independent seats from 9 to 10 veteran councillor Tom Kelly (Ind), the outgoing cathaoirleach, lost his seat in Laytown-Bettystown.