Alliance, Sinn Féin and the DUP secure one seat in Europe each 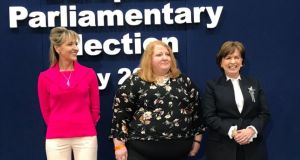 From left to right: Sinn Féin’s Martina Anderson, Alliance leader Naomi Long and Diane Dodds from the DUP at the count centre in Derry on Monday. Photograph: Freya McClements

The DUP candidate Diane Dodds was the first MEP returned. She was elected on the third count on the transfers of the eliminated Ulster Unionist Party candidate Danny Kennedy.

Earlier on Monday, Naomi Long has said her vote in the European elections in Northern Ireland was a clear message of support for remaining in the European Union and that she was “speechless” at receiving more than 105,000 first preference votes.

She said she had been clear during the campaign that a vote for her was a vote for Remain and a vote for a People’s vote on Brexit, and that this had been rewarded. “For those who try to misappropriate it and to put it into unionist or nationalist boxes, I’m not having that,” she said.

Ms Long will stand down as an MLA and said there would be “nobody more delighted than me” if she was able to serve the full five-year term in the Europe.

But she stressed she would continue as party leader and could continue to attend the multi-party talks aimed at re-establishing the power-sharing government at Stormont. “We have a bigger job to do than to just lead our parties,” she said.

The headline figure of the day was the 105,928 votes polled by Ms Long in the first count.

After the first count five candidates were eliminated including the Greens candidate and leader Clare Bailey. Their transfers, particularly Ms Bailey’s, increased Ms Long vote’s to 115,327 votes on the second count.

The figures suggested that Ms Long was on course to take one of the three seats at the expense of the Ulster Unionist Party. Its candidate and former Northern Executive minister Danny Kennedy was eliminated on the second count.

During the campaign there was considerable focus on who would take the third seat due to the decision of the Ulster Unionist Party (UUP) politician Jim Nicholson not to seek re-election after 40 years as an MEP.

A disappointing performance by the UUP in the North’s local elections also reinforced the view that it could be a tight battle for the third seat. And so it proved with Mr Kennedy polling just 53,052 votes. He was behind Ms Long and also behind the SDLP leader Colum Eastwood on 78,589 votes and Traditional Unionist Voice leader Jim Allister on 62,021 votes.

The figures from the first and second counts indicate that the so-called Alliance surge which saw the party increase its representation on the local councils from 32 to 53 seats has continued into the European election.

It would also suggest that two Remain candidates, Ms Anderson and Ms Long, and one Leave candidate, Ms Dodds, will be returned. It would also mean Northern Ireland being represented in Europe by three women.

Amid the uncertainty of when and if Britain and Northern Ireland exits the European Union the turnout in Northern Ireland was 45 per cent, which is about five percentage points down on the local elections earlier this month. The turnout is down more than six per cent from the 2014 European election.

The UUP candidate Mr Kennedy had warned that any drop in turnout would be damaging to the unionist vote.

From an eligible electorate of 1,278,951 a total of 577,275 people voted in Northern Ireland to return three candidates. How long those candidates will conduct their work in Europe will depend on how long the Brexit process will take to conclude – or whether the 2016 referendum result can be overturned in any possible future plebiscite.

The third seat was viewed as a contest between Mr Kennedy, Ms Long, Mr Eastwood and Mr Allister.

Transfers and eliminations will be crucial in determining the final outcome. Whoever came third on the first count was viewed as having the edge in terms of who would take the third seat. The advantage here lay with Ms Long.

The issue of Brexit also was a significant factor in the European election campaign with the DUP and UUP arguing for Leave and Sinn Féin, the SDLP, Alliance and the Greens standing for Remain.

The UUP campaigned for Remain in 2016, but the party now advocates for Brexit – insisting the result of the referendum must be respected. Northern Ireland voted 56 per cent to stay in the EU three years ago.