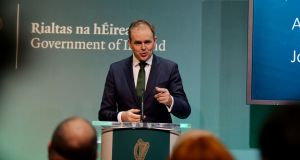 Minister of State Joe McHugh said the number of applicants for election missions was always higher than the number of available places. File photograph: Alan Betson

The Department of Foreign Affairs will shortly call for applications from individuals who wish to take part in overseas election monitoring missions, saying there was a delay in replacing the current five-year monitoring roster due to “staffing issues”.

The roster is a list of people available to participate in election observation missions organised mainly by the Organisation for Security and Co-operation in Europe (OSCE) and the EU, which play an important role in the promotion of democracy and human rights.

Countries to which a total of 46 Irish observers were sent in 2017 included Armenia, Turkey, Albania, Mongolia, Kosovo, Kenya, Georgia, the Kyrgyz Republic, Liberia and Nepal. The total cost to the department of deploying observers was €253,677 in 2016.

The election monitor volunteers are not paid but they are given a daily allowance, determined by the EU and the OSCE, to cover the cost of food, accommodation and expenses.

They are also paid a €600 grant once a year to cover expenses including vaccinations and transport costs ahead of travel to the country in question.

Independent TD Catherine Connolly and Social Democrats TD Catherine Murphy questioned officials from the department who appeared before the Committee on Public Accounts on Thursday, asking why there had been a delay in preparing a new roster to replace the one established in 2013.

They asked what the processes and criteria were for selecting participants, who are nominated as either long- or short-term election observers by the department.

Ruairí De Búrca, director general of Irish Aid at the Department of Foreign Affairs and Trade, told the committee a new call for applications would be posted within the next two weeks.

“Our intention is to try and get about 200 people on to the roster. It will be a competitive interview process and there will be a full note on that on our website with the call for applications and we will certainly send a copy of that over to the committee here,” Mr De Búrca said.

He said knowledge of languages was among the criteria for selection because English was not spoken in some of the countries in which the election monitoring missions take place.

“We want to get good people so it’ll be competitive – not everybody who applies will meet the threshold, I imagine,” he added.

Asked by Ms Connolly if details of the participants and the amounts paid to them in the current roster were published, Mr De Búrca said some details had been published. The department could, he said, provide a “degree of detail” but that there might be some data protection issues in relation to individual identities.

On why a new panel had not been picked before now, Mr De Búrca said the department “wanted to double check that our systems were robust and just because of staffing issues we have had some challenges moving the work along”.

In May last year, Independents 4 Change TD Clare Daly asked in a parliamentary question if the Minister for Foreign Affairs’s attention had been drawn to concerns that about a third of the 2013 election roster members had not responded to calls to observe elections and what the reasons were for that.

Minister of State Joe McHugh said 133 members of the current roster had at that point taken part in missions since 2013 and 61 members had not yet done so.

Mary Banotti, a former Fine Gael MEP and presidential candidate, was hired by the department in 2013 to select the roster. Her daughter Tania, sister and former minister for justice Nora Owen, and a number of Fine Gael politicians were among those subsequently chosen as observers.

The department said in 2015 that Ms Banotti had declared a conflict when scoring her daughter’s assessment. In such cases two departmental officials did the assessments instead.