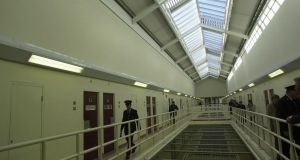 There are up to 14 criminal gangs operating in Irish prisons which are putting “huge pressure” on resources, according to the head of the Irish Prison Service (IPS).

Speaking at the publication of the Irish Prison Service’s annual report, Mr Donnellan said his staff estimated there were “between 12 and 14 major groups in the prison service”.

When asked what proportion of the 3,981 prison population were gang members, Mr Donnellan replied the number was in the hundreds.

Prisoners are asked on committal if they are linked to any criminal groups, but most decline to answer.

Gangs put “huge pressure” on resources, Mr Donnellan said. “Because you are having to separate people. You are having to run several regimes within a prison environment which the Prison Service was technically never set up to do. We have a duty of care to protect every person who comes into prison in Ireland.”

In 2017 there was a reduction in the number of prisoners on 22- or 23-hour lock-up. However, there was a 71 per cent increase in prisoners on “extended lock-up” under which they are locked in their cells for 19 hours or more a day, with limited access to education and services. Of the 514 people on extended lock-up, 177 had just three hours of out-of-cell time.

“Protection numbers have gone up in prison because when people come in to prison they seek protection in our prison environment. There is no doubt that is linked to drugs, it is linked to debts of money that people are owed in the community for these illegal substances,” Mr Donnellan said. “When you have that level of criminality on the streets it is then reflected in the prison environment.”

The Probation Service, which also published its annual report on Monday, said it had also noticed an increase in gang activity. The organisation’s director, Vivian Geiran, said it had to work with people who were under threat or who may pose a threat to others.

“We would work closely with the Prison Service and the Garda Síochána to identify any risks where they exist. Otherwise we try to provide the same level of service to everybody, but clearly we have to take safety and particularly our own staff’s safety into account.”

Prison reform group the Jesuit Centre for Faith and Justice said the increase in those on extended lock-up “is an indicator of how dangerous prison is to both prison staff and prisoners. Prison and prisoner safety needs to be a core issue for the next strategic plan.”

Last year several prisons’ visiting committees reported their concerns on the impact of criminal gangs on prison life. The Mountjoy committee said up to one in four prisoners were requesting protection, while the Cloverhill committee said gangs and gang violence remained a “serious problem”.

Nursing home residents expected to be allowed one visit a week 09:24
Brexit: Negotiators will work hard to avoid sausage ban, says Minister 09:05
Covid-19: Hairdressers, gyms and religious services could return next week 08:21
Vicky Phelan considers move to US for experimental drug trial 07:52
Exiting Level 5: Ministers to push for reopening of shops, restaurants and churches next week 03:53