Dublin airport could have a third terminal, says Shane Ross 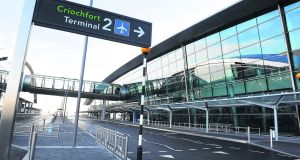 Minister for Transport Shane Ross has raised the possibility of a third terminal being built at Dublin airport.

Mr Ross said a forthcoming report on the future of air travel in Ireland will address the issue of a third terminal.

Mr Ross also described the building of a second runway at Dublin Airport as an “absolute imperative”.

His department commissioned a review of future capacity requirements at the State’s airports up to 2050. The report is expected to be published soon.

He raised the possibility of such a terminal being independently run. Ryanair had offered to build and operate Terminal 2 but this was turned down by the Government.

“We must ask the question, without fear or favour, that maybe we should have a third terminal,” Mr Ross said at the launch of the transport strand of Project 2040 at Dublin Port’s offices on Monday.

“Maybe we should have an independent terminal at Dublin airport if that is in the interests of the consumer and the national interest as well.”

His suggestion may face opposition from the Irish Congress of Trade Unions (ICTU) which has stated that a third, independently-run terminal at Dublin Airport is not needed.

Construction on the long-delayed €320 million north runway is due to start at the end of the year and is forecast to be operational by the end of 2021.

He said building the second runway at the airport is “absolutely critical” and it will be an “economic catastrophe” if it cannot be built on time.

“This is a once-in-a lifetime piece of infrastructure which opens up Ireland to the rest of the world,” he said.

He said work on the runway has to start in the autumn because future planning constraints will restrict the number of flights that can land and take-off from the airport between 11pm and 7am.

The north runway will not be allowed to operate between those hours and the amount of flights arriving and departing will be reduced on the first runway from 120 to 65 at night.

Transport Infrastructure Ireland chief executive Michael Nolan said the M50 is operating at levels which were not due to happen until the mid-2020s.

Mr Nolan said there had been a “huge increase” in traffic in the last four years and traffic is growing year on year by between 7 and 8 per cent.

He added that traffic is growing because of a lack of public transport alternatives in the Dublin area and the solution is not to expand the motorway.

The M50 is a “finite piece of road space and we can’t keep building our way out of the problem. We need a public transport solution,” he added.

Mr Varadkar said public transport and cycling is “the only future” for Ireland’s main cities as Dublin, Cork and Galway are medieval in origin and cannot take any further increases in car traffic.

Mr Varadkar pointed out many commuters in the western half of his constituency of Dublin West spend two hours on the bus every day; one hour getting to work and another coming home.