Defence Forces train in Co Wicklow ahead of Syria deployment 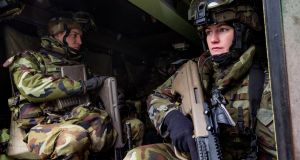 The 130 men and women of the 55th Infantry Group poised to deploy next month to the Golan Heights in Syria as part of the United Nations Disengagement Observer Force (Undof) there are nearing the end of their pre-mission training.

On Tuesday, in misty, drizzly and chilly weather typical for the Glen of Imaal in Co Wicklow at this time of the year and unlikely to be replicated on the Golan, they continued their MRX – Mission Readiness Exercise – the final phase of a training schedule that has been going on for months.

A rat-tat-tat of heavy machinegun fire spattering into a valley joining Lugnaquilla and Camenabologue mountains fractured the air as 2 Platoon led by Lieut Stephen Cunningham, a patrol of three Mowag armoured personnel carriers, inched its way down a boreen east of Cemetery Hill.

In a “vulnerable point crossing drill”, an exercise designed to instil by practice how best to react when patrolling suspect terrain and coming under attack, three infantry soldiers dismounted from the lead Mowag to give cover to two engineer colleagues as they walked forward, sweeping the ground with ballon mine detectors as they went, checking the way for the rest of he patrol .

At the bottom of the hill, the boreen dipped through a cross roads and into a ford on the Little Slaney, a peaty-brown stream with grassy banks shaded by pine trees – more summer picnic site than war zone.

Suddenly, several dull thuds on the far bank of the stream kicked peat and vegetation into the air and spewed smoke about – sights and sounds that were immediately recognisable as nothing to do with the mountain attacking exercise nearby.

The mine sweepers retreated rapidly, their rifle colleagues returning fire in the direction of the simulated mortar attack and the presumed Improvised Explosive Device (IED). A second Mowag scrambled down the boreen and disgorged troops who took up supporting positions and returned fire, including smoke bombs to cover the retreat.

In less than a minute, the Mowags sped off – the exercise over, the photographers happy. So too was Capt Paul Ryan, company second in command and the supervisor of what had been turned, deliberately, into an IA – an Immediate Action drill – army-speak for “do it now!”

The 130 soldiers of the 55th will deploy to Camp Ziouani of the western side of what should be a well-defined, tadpole-shaped, north/south buffer zone on the eastern edge of the Golan Heights, an Area of Operation (or AOR) that separates Israeli-occupied Golan from western Syria proper.

However, because of the Syrian civil war, the eastern flank of the AOR, the UN observation posts along it and Camp Faouar serving them, had to be abandoned in late 2014.

Last November, the UN returned to the camp and planned to deploy 150 observers in it as part of a continuing desire on the part of the UN to re-establish the buffer zone fully, so as to observe Israeli and Syrian adherence to their disengagement, and reassert the 1974 UN mandate.

The Defence Forces first deployed to Undof in September 2013 and the latest contingent comprises two mechanised infantry patrols, a cavalry and artillery reconnaissance troop and a contingent support group.

Collectively, they constitute a Force Reserve Company to protect and assist the UN observers, who come from Fiji, India and Nepal, and be capable of deploying a Quick Reaction Force at any time within 15 minutes of being asked.

Most of the 130 (14 officers under the overall command of Lieut Col David Cowhig, 115 enlisted personnel and a chaplain) have been drawn from the Defence Forces Training Centre in the Curragh, Co Kildare, but 20 have come from the Air Corps, the largest such UN peacekeeping deployment by the corps to date.

For Regimental Sergeant Major John Murray (57) this will be his 15th overseas mission, having completed nine previous missions to the Lebanon, two to Kosovo, and one each to Somalia, Bosnia and Afghanistan.

He is looking forward to mentoring younger soldiers and working with Air Corps volunteers.

“It’s their getting used to the Army and we to them,” he says.

For Valerie Cole (31), sergeant in 2 Platoon and the face of last year’s recruitment campaign to increase the Defence Forces female intake, Wednesday being International Women’s Day would just be another day’s work.

“In the Defence Forces, it doesn’t matter what gender you are,” she said. “If you can do the job, that’s all that counts.”

For Lieut Col Cowhig (53), who has already visited the Golan and been briefed as to what to expect (the region is quiet at present), the mission is clear.

“I want us to deploy and operate effectively,” he said, “and enhance Ireland’s reputation internationally as peacekeepers and help every member of the group to develop professionally.”