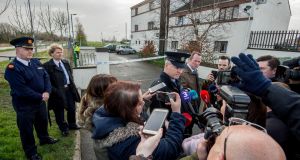 Inspector Ken McLoughlin speaks to media after a fire at Cluainin Cronan, Clondalkin where a woman and two children died. Photograph: Brenda Fitzsimons / The Irish Times 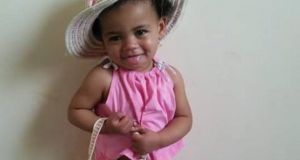 Paris O’Brien (2), daughter of Annmarie O’Brien, who also died in the fire. 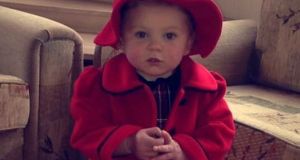 Annmarie O’Brien’s niece Holly (3), who also died in the fire in Clondalkin. 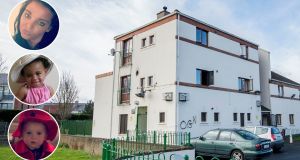 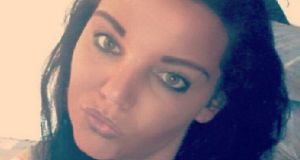 Annmarie O’Brien (27) who died in the fire at an apartment in the Kilcronan estate in Clondalkin.

A pregnant woman and three children have died, and another person is in a critical condition in hospital, following a fire at a step-down facility for victims of domestic violence in Dublin.

The 27-year-old woman, named locally as Annmarie O’Brien, died in the blaze at the Kilcronan estate in Clondalkin.

Her two-year-old daughter, Paris, also died in the blaze. A four-year-old boy was treated at Our Lady’s Hospital Crumlin but died later.

Another woman (30), who was visiting the facility, is in a critical condition in St James’s Hospital. Her three-year-old daughter was killed in the fire. It is understood the two women were sisters.

The fire happened overnight in a first-floor apartment. Firefighters were conducting a forensic examination in an effort to determine the cause of the blaze.

A garda at the scene said it was assumed that the likely cause of the fire was an electrical fault rather than anything malicious.

The step-down facility, run by Sonas, provides accommodation to families for 18-24 months pending their relocation to more long-term housing.

A woman who arrived at the apartments with two children shortly before lunchtime said she had “just lost my best friend” and was too upset to speak further.

Two local women, Lisa Kinsella-Colman, a mother of four, and Roselyn Byrne, a mother of three who lived in Kilcronan Court, earlier placed flowers, teddy bears and candles at the entrance door to the apartment block.

Both women described themselves as “devastated” at what had occurred and said they found it particularly difficult when preparing their own children for school after what had happened.

Sadly, we were called to a tragic fire in #Clondalkin in the early hours. Our thoughts are with the families, friends & local community.

“Our kids are in school with other kids in the area. It’s very safe. I’m sure all these kids played together,” said Ms Kinsella-Colman.

Sonas domestic violence charity chief executive Fiona Ryan said the organisation’s sympathies and condolences were with the relatives and friends of the women and children involved the fire.

“We are devastated by the tragic loss of life which occurred as a result of fire in an apartment in our supported housing complex in Clondalkin,” she said.

“Sonas is working with the relevant authorities on their inquiries. We are currently supporting other families in the apartment complex including those unable to return to their homes because of fire damage for whom we are sourcing alternative accommodation.”

A personal note from the team at Sonas said they were “heartbroken” at the tragedy and were working to support the other women and children in the complex.

“One of the comforts of this morning has been the incredible offers of support from our sister organisations in Dublin and Safe Ireland. It means so much to us.”

Another man who lives locally, Tom Carty, said he regularly delivered food vouchers to residents of the apartments on behalf of the Society of St Vincent de Paul.

Another near-neighbour, Martin Healy, who walking his dog along the banks of the canal, said he regularly saw women from the step-down facility on his walks. “They’re lovely, lovely people, just minding their own business. It’s an absolute horrible feeling to hear what happened.”

Speaking at an event to mark International Women’s Day, President Michael D Higgins said four women from Sonas had been due to visit Áras an Uachtaráin on Wednesday but had not because of the tragedy.

“All our hearts must go out to these women and children,” he said.

Speaking in Dublin Wednesday, Taoiseach Enda Kenny said: “I would like to express my deep sympathies on the death of a young mother and two young girls who lost their lives due to smoke inhalation in a fire early this morning, and to the others who have been injured.

Local Sinn Féin TD Eoin Ó Broin, who visited the scene this morning, also extended his sympathy to the families and friends of those killed.

“Like everybody, we are particularly shocked given the age of the young people. Our condolences go out to the entire community,” he said.

Seven people in nearby apartments were evacuated after gardaí and fire services were called to the scene at Cluainin Cronan at about 2.30am.

In a separate incident, a number of people were injured after a fire broke out in an apartment complex on Dominick Street in Dublin’s north inner city.