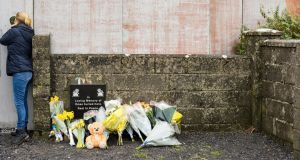 “Everyday she’s on the boat

When it pulls out from the quay

Across the Irish Sea..”

Tuam band the Saw Doctors made reference to the State’s attitude to unintended pregnancy in the lyrics of their song Everyday.

The Bon Secours mother and babies home had been closed for 35 years when Leo Moran and Davy Carton wrote it, but Moran has never viewed attitudes to women as being particular to their town.

The work of Catherine Corless brought to light 796 children's death certs relating to the home in Tuam. Here are all of their names #CBLive pic.twitter.com/oipboNTUNF

“The same goes for now with the mother and baby homes commission – this is a national issue, and it just so happens that Tuam’s name is out there,” he said while taking a break from rehearsals in Headford. “I don’t think people in Tuam should feel guilty or ashamed, because what occurred out the road in the home reflected Irish society in general at that that time.”

Moran said he was not in excusing any organisation or person but that it was a hard issue to talk about “without offending anyone”.

“I am sure there were kind-hearted young nuns in the home, but there was nowhere they could turn, and they risked being punished or sent to the madhouse if they questioned what was practice,” he said.

“It was a very dangerous time to be living in Ireland, but when you see what happens to a garda whistleblower now when he asks questions it makes you realise we have to be vigilant all the time.”

Moran is of a generation that grew up after the surviving “home babies”, as the children in the care of the Bon Secours order were known, had long left the town.

The Tuam home was originally opened in 1925 by the nuns in the old workhouse at the request of the local authority. It was regarded as higher in the pecking order of refuges for unmarried mothers than the Magdalene laundry in Galway.

University College Dublin historian Dr Lindsey Earner-Byrne has pointed out that the new Irish State consciously sought to relegate the issue of the “care” of unmarried mothers and their children to the churches – not just Catholic.

At the same time, the State’s registrar-general began recording infant mortality outside marriage an independent category, perhaps because it was so high- five times the “normal” rate. As she records in her book, Mother and Child:Maternity and Child Welfare in Ireland 1920s-1960s, these annual figures were kept from as far back at 1923.

There were also key officials who attempted to change the system or advocate for these babies, in particular, the child inspector Alice Litster who, in 1948, referred to children born outside marriage as “infant martyrs of convenience, respectability and fear”.

Artist Jojo Hynes,who grew up in Creevaghbaun, 5km outside Tuam, said Tuam “should not hide from this present negative press coverage”. It may serve “to remember the wrongdoings against the mothers and babies of its past and instigate change for the future of all its women and children”.

She said her wish as a Tuam native would be that the global media coverage would lead to “justice, accountability and transparency” for mother and baby home survivors and victims. “And I truly hope this should lead on to a complete separation of church from State schools, hospitals, and institutions,” she says.