Defence Forces ‘in crisis’, can not guarantee security of State, rally hears 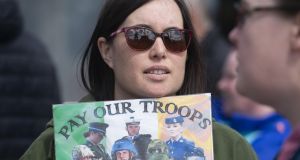 Attendees at the rally called on the Government to improve pay and conditions for members of the Defence Forces. Photograph: Michael Mac Sweeney/Provision

The Government must address the crisis in the Defence Forces which has now reached the point where its effectiveness is so broken that it can no longer guarantee the security of the State and its citizens, a protest march by former members of the Defence Forces has heard.

Almost 1,500 former members of the Defence Forces from the Army, Air Corps and Naval Service marched in the second Respect and Loyalty Parade through Cork city to highlight poor pay and conditions.

Parade organisers said 166 personnel left the Defence Forces in the first three months of 2019, while a high-profile recruitment campaign last year led to a net gain of just three and the overall number in the Defence Forces now stands at around 8,500, 1,000 less than the recommended minimum number of 9,500.

Retired Lt Col Dan Harvey addressed a rally in the Grand Parade, saying that it was a sad day when retired members of the Defence Forces felt they had to march to highlight the situation in which their currently serving comrades find themselves.

“We are living in a changing Europe, a troubled world and uncertain time, and at such times of instability, unpredictability and threat, a well-resourced Defence Forces is needed, necessary and non-negotiable. Instead the State is woefully unprepared, dramatically undefended and shamefully exposed.

Mr Harvey said that the Defence Forces had undergone eight re-organisations in 23 years and, as a result of many of these reviews, its capabilities had improved to the point where it was self-sufficient and capable of deploying almost anywhere in the world to respond to a UN request for assistance.

However that all changed with the 2012 re-organisation of the Defence Forces “which was a complete disaster, conduced purely on the basis of costs and political [with] not one thought about operational effectiveness,” he said.

He warned that the 2012 review, undertaken before the white and green papers on defence, had effectively downgraded the Defence Forces to a current position which is “one of a defence policy of pretence than one that is ready to respond”.

Recalling that some 90 members of the Defence Forces had lost their lives in service both at home and overseas, Mr Harvey said that former members had identified where it could concentrate its voting power in forthcoming elections to effect a change of policy from the Government.

“We need to reverse the ruinous regime of so-called reform – we need a resurrection of reality, resources and response on the security front,” said Mr Harvey as he called on the Government to place a value on respect and loyalty by addressing the crisis in the Defence Forces.

In attendance was Fianna Fáil leader Micheál Martin, whose late father Paddy served in the Irish Army during the second World War. The party’s spokesman on defence Jack Chambers also attended, and called on the Government to act immediately to address the retention issue.

“Fine Gael cannot continue to ignore the crisis in Defence Forces. The numbers serving has fallen below 9,000 and morale among members is on the floor. Pay and conditions is one issue, but many members feel completely abandoned by Fine Gael,” said Mr Chambers

Sinn Féin Ireland South MEP Liadh Ní Riada also attended, and said it was entirely understandable that the retired members of the Defence Forces felt that they had no option but to march to highlight the plight of their still-serving comrades.

“It is scandalous that members of the Defence Forces have been consistently sidelined in public service pay negotiations and are being excluded from trade union membership or affiliation with ICTU. They are also legally prevented from public demonstration or protest over terms and conditions.

Ms Ní Riada said the Permanent Defence Force Other Ranks Representative Association (PDFORRA) was “forced to go to the High Court to vindicate the right of defence force members to the provisions of the Working Time Directive” last year. She said the PDFORRA also went to the European Committee on Social Rights to vindicate their right to collective bargaining over working terms and conditions.

Before the march, which was led by the Irish United Nations Veterans Association Pipe Band, Cathal MacSwiney Brugha, grandson of both the former lord mayor of Cork Terence MacSwiney and former minister for defence Cathal Brugha, read the 1916 Proclamation at the National Monument on the Grand Parade.