Dart nightmare: ‘I was trapped, stuck and scared’

‘They wondered aloud what I would look like with no clothes ... blowing smoke in my face’ 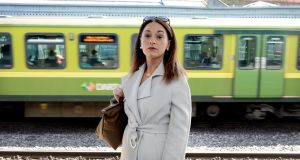 They got on at Dún Laoghaire, just as the carriage doors were hissing to a close.

The silence was instantly pierced by animated voices, foul language and music blaring from a smartphone. Four of them, in their twenties, young men with bags of beer and attitude.

Despite the carriage being virtually empty they purposefully strode in my direction and took the three remaining places in my four-seater.

Their friend took up residence in a seat across the aisle, lounging back against the window, legs askew as he lit a cigarette and cracked opened a can.

I was hemmed in, and despite feeling acutely uneasy, I summoned up a relaxed expression and stared out the window, determined not to reveal my growing anxiety.

They asked my name, showered me with crude compliments, offered me a drink and suggested that I join them in Howth for “some fun”.

I smiled tightly in an effort to placate them, and turned my head away, my mind whirring with fear, skin crawling at being in such close proximity to them.

Should I take my phone out and ring someone? No, they might steal it. Should I get up and move? No, that could cause a backlash and make the situation worse.

When you’re alone and outnumbered, fear can take over

So I was trapped, stuck and scared. The air was heavy with cigarette smoke and the smell of stale alcohol.

And still the lewd taunts kept on coming, as they wondered aloud what I would look like with no clothes on, all the while blowing smoke towards my face.

I steadied myself and stood up, staring one of them straight in the eye as I said, “excuse me”.

The man to my right lifted his legs up and blocked my path, saying, “you’re not leaving us” to raucous laughter. For what felt like minutes I remained standing and he eventually lowered his legs.

I could feel myself shaking and the heat rising under my skin. In a moment like that when you’re alone and outnumbered, fear can take over.

Moving along the carriage I sat down, relieved to have a renewed sense of personal space, yet conscious they were only metres away.

The heckling continued, taking on a nasty tone in the wake of my departure, as drunken voices called me a “stupid, stuck-up bitch”.

We pulled into Seapoint and I alighted, running to the relative safety of the next carriage. I was shaken but safe. And I was angry.

This occurred not late on a weekend night, but on a Thursday at lunchtime.

Have you experienced anti-social
behaviour on public transport?

Why wasn’t there a number I could text to let security know I needed assistance?

Why when I got off the train was the station unmanned, meaning I couldn’t report the incident?

Why, as a daily user, do I only see security staff on Darts once or twice a month at most?

My experience is far from unique.

Many people who use public transport have been subjected to annoying, intimidating or in some cases violent incidents.

Those who engage in such behaviour know they can run amok with little or no chance of being caught.

Complaints of mock fighting, urinating, defecating, vandalism, assaults, robberies and sexual assaults by passengers have been well documented in the news and on social media.

Last summer was marked by widespread chaos following a Liam Gallagher concert in Malahide and a Taylor Swift one in Croke Park. Train doors were prised open, windows smashed and hordes of people walked home along tracks.

A teenager was rushed to hospital last November after being stabbed in the chest by another youth on the Dart between Killester and Harmonstown.

The general consensus is that boisterous behaviour and thuggery has reached an all-time high.

Recently Irish Rail admitted that it is “concerned” by the rise in anti-social behaviour on trains. Figures it released showed incidents on the Dart have almost doubled over the last two years. More than 560 complaints were made to the company by passengers in 2018 over issues like vandalism, assault and theft.

This represented an increase from 350 the previous year.

Yet Irish Rail sought to console us with a statistic.

That’s cold comfort to anyone who has been on the receiving end of intimidation, robbery or assault.

An Irish Rail driver with 18 years’ experience said he and his colleagues are at breaking point.

“On a sunny summer’s day, especially a weekend day, I have a knot in my stomach as I just know there’s going to be trouble. Trains getting smashed up, people are smoking, drinking, using drugs and fighting. When someone comes up to my cab and alerts me I’m scared to go back and investigate. I would have done so years ago but not anymore,” he said.

The driver said that because CCTV does not feed into the cab he does not know what is going on abroad the train.

“The CCTV can be requested by gardaí and is downloaded from a server at that stage. We wanted it in our cabs as when the emergency chord is pulled it could be anything from a passenger having a heart attack to a full-scale fight. We have no idea what we are walking into,” he said.

‘Used as a youth club’

He believes management have shown apathy regarding increasing safety measures on trains and are doing nothing practical to address it.

“Drivers fear for their own safety as well as that of their passengers. A couple of years ago a driver was headbutted by a passenger in Greystones station and fell backwards on to the tracks.”

He explained that since management closed the ticket offices in almost all stations on the Dart network anti-social behaviour has increased.

“That physical presence of a human in the station was a deterrent to people who are setting out to deliberately cause trouble on a train,” he said.

He believes the lack of ticket checking on trains serves to encourage anti-social behaviour.

“The Dart is used as a youth club by certain teenagers who know they don’t have to pay because they won’t be caught for fare evading. They use the free wifi, they drink and smoke and play loud music and have a grand old time,” he said.

Travelling alone shouldn’t be a harrowing experience, especially when you are paying for it.

In an effort to improve passenger confidence, Luas introduced a text service whereby an incident can be discreetly and speedily reported. Within 90 seconds an automated response will bounce back, saying the text has been received and teams will respond to the incident.

Luas also monitors CCTV at stops and on trams.

Passengers on Transport for London can report anti-social behaviour by text and online, while operators in New York, Washington and Boston allow train users to upload photographs as evidence to assist in a subsequent investigation.

Are we waiting for a watershed? Does something truly awful have to happen before action is taken?

Anti-social behaviour has been normalised. It’s time to reclaim our trains.