Deaths from Covid-19 in the State could soon surpass 100 per day, experts warn 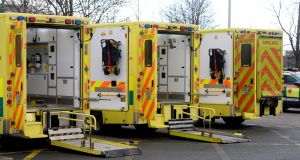 The number of deaths from Covid-19 is expected to surge and could rise to beyond 100 per day in the weeks ahead, far higher than the peak figures experienced in the first wave last spring, health experts have warned.

The warning came as the pressure on hospitals dealing with growing numbers of Covid-19 patients mounted on Sunday night. Nurses said patients at Letterkenny University Hospital in Donegal – most with some form of respiratory problems – were being treated in seven ambulances outside the facility due to lack of room in the emergency department.

A hospital spokeswoman said it was “an extremely busy weekend” with a “large number of patients presenting with suspect or confirmed Covid-19, many of whom required admission to the hospital”.

The hospital had few beds available, which resulted in delays in admission specifically for patients going to the dedicated Covid-19 zone, the spokeswoman said.

It secured additional staff on Sunday evening, enabling it to open a further 11 beds in order to respond to the demand.

A further 6,888 confirmed cases of Covid-19 and eight additional deaths were recorded on Sunday.

The Minister for Health, Stephen Donnelly, said on Sunday night, however, that there were some positive signs in relation to Covid-19. But he warned that the trajectory continued to rise sharply for infections of the UK variant of Covid-19.

The Minister said indicators for new cases were improving, with a reduction in positivity rates, in the numbers of cases referred for testing by GPs, and a fall in the number of close contacts.

The median figure for close contacts is now believed to be below three contacts per diagnosed Covid case, fewer than half the average 6.3 contacts per person on December 29th.

However, given the really high number of cases reported since Christmas, he said the situation in relation to hospital beds and ICU availability remained “very serious”.

There were 1,452 Covid-19 patients in hospitals on Sunday afternoon, of which 125 were in intensive care units.

The Department of Health said 100 additional people were hospitalised in the 24 hours to Sunday afternoon.

Immunologist Prof Luke O’Neill said there was a “risk” the number of deaths per day could rise to 100 or higher. The highest daily toll so far was on April 20th when 77 deaths were reported.

He said the Covid situation was a “maelstrom at present” and it was “highly unpredictable”. A small number of large outbreaks in nursing homes could push death rates even higher.

Prof Kingston Mills, director of Trinity College’s Biomedical Sciences Institute, said: “It is inevitable that we are going to see an increase in daily deaths as the daily rate has increased dramatically in the past two to three weeks.

HSE chief executive Paul Reid expressed concern at the rising trends and said that a new initiative to allow public patients to avail of up to 30 per cent capacity – or about 600 beds – in private hospitals had already been triggered.

However, an association representing doctors in the private sector warned about what it described as the slow pace of vaccination of staff in the independent hospitals.

The Medical and Dental Consultants’ Association said there was no sign of vaccination of staff in the private sector in Dublin or Galway as of yet. It warned if staff in private hospitals became infected and could not go to work, the new agreement with the HSE could fall apart.

The Government’s task force on Covid-19 vaccination is expected to meet on Monday. Talks took place over the weekend between the HSE and the Irish Medical Organisation (IMO) about the involvement of GPs in the roll-out of the AstraZeneca vaccine if approved by regulators in the weeks ahead.

On Sunday the HSE said 600 beds in public hospitals were not in use because staff either had contracted Covid-19 or were deemed to be a close contact of a person with the condition.

The HSE said about 800 staff in nursing homes were also absent because of issues related to Covid-19. The private nursing home sector said there were “significant challenges in maintaining staffing”.

Pressure on hospitals in Northern Ireland has also intensified. On Sunday night the Western Health and Social Care Trust appealed to off-duty staff in the vicinity of its hospital in Enniskillen to go directly to the hospital to help it cope.