Bones found near location of skull discovery in Co Cork 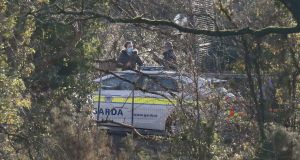 The scene on the outskirts of Midleton, Co Cork, on Wednesday, where partial skeletal remains were found. Photograph: Niall Carson/PA Wire

Gardaí investigating the discovery of a human skull near Midleton in east Cork have recovered a number of bones which they hope will help scientists identify the deceased and how they ended up where they were found.

Gardaí had cordoned off the area near the Shanty Bridge in Roxboro on the route of the old Midleton to Youghal rail line, some 3km from the town, following the discovery of the skull on Tuesday afternoon.

Garda technical experts carried out a finger tip search of the area on Wednesday and Thursday and found a number of bones near the skull which they believe are human and quite likely linked to the skull.

“The bones could be arm or leg or even rib bones - we need to have them examined by experts but they were found quite close to where the skull was recovered so we expect that they are all connected,” said a Garda source.

Initially, gardaí believed the skull was that of a male, but they are now keeping an open mind on the gender of the person and say they are awaiting the results of a number of scientific tests to help identification.

Assistant State Pathologist Dr Margot Bolster carried out an examination of the skull at the scene while forensic anthropologist, Dr Lorraine Buckley, also examined the skull at the morgue at Cork University Hospital.

They are hoping DNA samples taken from the skull and other bones may help identify the person, and that radio carbon testing will help date the remains, which sources say may not be as old as first thought.

However gardaí are remaining tight-lipped about the investigation and have not speculated on who the deceased might be. Gardaí said they will be guided by what the medical and scientific experts can establish.

“At the moment, the scene remains preserved as a scene that can provide us with evidence - our investigation is focussing on who the deceased is, how, where and when they died and how they ended up where they were found.”

The Garda source said the matter was being investigated to the highest standards and if it transpired the person was not the victim of foul play, then a full file on the death would be prepared for an inquest in the coroner’s court.