Independent postmortem on George Nkencho (27) to take place on Tuesday 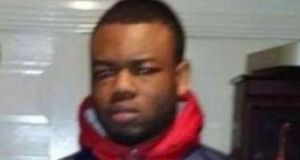 George Nkencho who was fatally shot by Gardaí in the Manorfields area of Clonee, Dublin on December 30th.

The clothing worn by George Nkencho (27) when he was fatally shot by gardaí, along with other pieces of physical evidence, will be examined by a pathologist working on behalf of the family.

The Irish Times understands that when former Northern Ireland pathologist Prof Jack Crane carries out a second postmortem on the remains of Mr Nkencho next week in Dublin, his remit will extend to examining exhibits in the case.

The dead man’s family wants to determine the order of the shots that hit Mr Nkencho in a bid to know more about how he died. The family’s solicitor, Phelim O’Neill, said that while results of the State’s postmortem on the remains concluded two of the shots had proven fatal as they hit vital organs, where exactly the dead man was shot was unclear.

The Garda Síochána Ombudsman Commission (Gsoc), which is investigating the case, contacted the family on Friday to inform them that the postmortem concluded Mr Nkencho was wounded six times. Five of the shots were to the torso and one was to the arm. However, Mr O’Neill said it was important to know if the shots were to the front or back of the torso.

“If any of the shots was to the back, were they the fatal shots? It’s enormously significant that we would know that,” he said.

Mr Nkencho was shot dead by the Garda Armed Support Unit outside his home after he assaulted a shop worker in a nearby supermarket, and an altercation with gardaí continued over a distance through a housing estate and towards his home. He was armed with a kitchen knife and had, his family have said, been suffering from mental health issues in the preceding months.

A video of the shooting, outside the Nkencho family home in Clonee, Dublin 15, on December 30th, recorded five shots being fired and appeared to show him lunge at gardaí in the front garden of the house.

However, the video was recorded by a bystander from a distance and was of poor quality. It was unclear if the footage failed to capture all six shots because the sound quality was inconsistent or because the footage only began after a first shot had already been fired.

The Garda said officers engaged in a graduated response to the threat, first issuing verbal commands before using pepper spray and Tasers to subdue Mr Nkencho. However, after those earlier tactics did not bring the incident to a peaceful end, gardaí followed Mr Nkencho to his home where a stand-off ensued in the front garden, ending when the shots were fired.

The dead man’s family has opted to exercise its right to a second, independent postmortem and that is due to be carried out on Tuesday afternoon at the City Morgue, Dublin.Prof Crane is also expected to have access to the clothing and some other exhibits in the case, as well as having access to Gsoc investigators to ask questions to inform his work.

While independent postmortems are unusual in the Republic, they are not unprecedented. In many cases, second examinations are based on photographs and other records and are effectively a paper-based audit of the State postmortem. However, interested parties in a case can also opt for a second, independent postmortem, though that rarely happens.