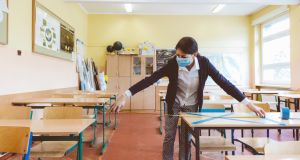 Advocacy groups will tell Minister for Education Norma Foley of the urgent need to reopen special schools and classes in a meeting on Monday. Photograph: iStock

The Government is being urged to prioritise the vaccination of special education teaching staff next month in order to speed up the reopening of schools for vulnerable pupils.

“There are lots of worthy candidates for vaccination but we’re asking the Government to prioritise special needs school staff so we can get pupils back to the classroom,” he said.

“These school closures could last months. Pupils with additional needs and their families are used to being at the back of the queue. This is a chance to put them at the top.”

A spokesman for Minister for Education Norma Foley said she was keen to reopen schools and was focused on working with education partners to achieve this.

Informed sources, however, say any limited form of school reopening is unlikely during January.

Meanwhile, advocacy groups representing children with additional needs will tell Ms Foley of the urgent need to reopen special schools and classes in a meeting on Monday.

Down Syndrome Ireland, Inclusion Ireland and AsIAm will say parents need access to a range of home supports in the meantime in order to limit damage to the development of vulnerable children.

Adam Harris, chief executive of AsIAm, said the three groups would tell Ms Foley that parents and their families were devastated over the decision to keep special schools and classes closed.

By contrast, he said, special schools across much of Europe had been kept open due to the recognition of their vital importance to families.

In the meantime, he said, parents needed access to a range of support options such as home tuition and other options to help limit damaging learning losses.

He said advocacy groups must also form part of official talks from now on over the reopening of schools.

“We need assurances that we will be briefed and involved in all discussions from now on,” he said. “The views of parents and children must be represented.”

In addition to children in special schools and classes, the three groups estimate there are about 12,000 children with additional needs in mainstream classes who also urgently need support.

A spokesman for the three advocacy groups said: “The stories and experiences shared by parents in the media last week were stark illustrations of the negative impact a complete withdrawal of educational support can have on children with special educational needs.”

He added: “We are hopeful that, with all stakeholders working together to put the interests of vulnerable children first, progress can be made on this issue.”

Separately, meetings between the Department of Education and education stakeholders to discuss the future of the State exams have been postponed until next week.

Education sources said it would be necessary to “move timeframes” for components such as project work or oral exams due over the coming weeks.

Ms Foley has said she is determined to hold a traditional Leaving Cert exam in June, but this will require a physical return to school for sixth-year students.

The Labour Party, however, has called for a firm decision on the future of the exams to be made by early February.

“We need clarity,” said Mr Ó Ríordáin. “One option is to give students a choice of calculated grades or the Leaving Cert. Either way, students need to know what is being planned.”