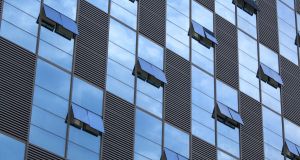 All along building ventilation has been hiding in plain sight.

Covid-19 has meant hard choices and serious consequences, with an escalation in restrictions and enforcement. But, if the rules aren’t being effective, could the rules be wrong? Last week the HSE gave a briefing about recent outbreaks. One case resulted in the infection of four restaurant staff and six people at another table; another cluster involved 14 of 27 students in a class. It was confirmed that Nphet guidelines were being followed, but when asked how this could have happened the HSE response was that “this virus is very unpredictable”.

This week there are 31 outbreaks in nursing homes and 25 in communities where people live in close proximity. A cluster from a cafe in Cork resulted in 57 infections; and of the 28,000 cases nationally up to the end of August, more than one in 20 were workers in meat plants.

All of these outbreaks follow very similar patterns to other countries and they all happen where crowds gather in very specific conditions – indoors in poor ventilation.

What is sidestepped in public health advice is that “super-spread events” are clear-cut and can be prevented. “Super-spread” is defined as an occasion where five people or more become infected, and up to 97 per cent happen indoors, according to research from Japan.

Moreover, just 10-20 per cent of those carrying Covid may be causing 80 per cent of new infections and it happens in known high-risk conditions. So, public health advice to “halve all contacts” is unlikely to halve the new cases when the majority of contacts are low-risk and where these known super-spread conditions are permitted, even at Level 5. Evidently, targeted prevention in specific locations is the only way to significantly reduce new cases.

In Ireland, a drop in cases coincided with warmer temperatures when activity moved outside and buildings were ventilated freely. Recent household infections have been attributed to people disregarding the rules, but perhaps it was the weather that changed rather than their behaviour? In the absence of public health warnings, most people are simply unaware that opening windows can reduce or eliminate the virus spread in their homes and cars.

Conversely, in meat plants ventilation is reduced in summer when air is recirculated to operate at 10 degrees. Research from Germany confirms that airborne virus in these conditions infected workers as far as 8m apart. At another super-spread event in Washington, one person at a choir practice infected 52 of 61 others, two of whom died. Increasing ventilation and shortening the event would likely have halved the infections. It is known that singing, shouting, exercising and even talking can increase the virus in the air.

It is now believed, from these and other cases, that most spread is airborne, that there is no safe distance in a poorly ventilated room and that conditions can move from low- to high-risk within 15 minutes.

Recent research spans environmental engineering, particle physics and virology and points back to how Ireland beat tuberculosis with space, sunlight and fresh air. In the last century disease – Spanish Flu and TB – changed the way that buildings were designed and it will again now.

Yet, while international research is providing answers, we still have “rules of thumb” for two-metre distancing and two-hour duration, now understood to be unsafe oversimplification. Without a science-base, these rules are resulting in unknowing high-risk behaviour on the one hand, and unnecessary social isolation and business closures on the other.

All along, building ventilation has been hiding in plain sight in different rules for indoors and out. Covid-19 is a respiratory virus, it is caught from breathing. In the open air, the virus is diluted and dispersed in the air, but inside, aerosols, the particles small enough to remain in the air, can linger, spread and build up to dangerous levels, similar to cigarette smoke. Ventilation is key to prevention because the risk of breathing in Covid-19 is 20 times higher indoors.

Air quality in buildings can be measured, managed and monitored, so improving ventilation reduces or eliminates these risks.

Active and targeted prevention of specific high-risk conditions, such as in meat plants, direct provision, overcrowded housing and schools is key to both keeping buildings open and people out of hospital, without compromising the health services or the economy.

Last February, Japan identified ventilation as critically important to preventing conditions for super-spread. Public health advised avoiding the 3 Cs “closed spaces, crowded places, and close-contact settings”. With a population of 126 million, the total number of deaths from Covid-19 in Japan is just 1,578 which is lower than in Ireland with a population of five million, with 1,806 mortalities.

Comparisons between countries, are very difficult but the arguments in favour of ventilation as a critical weapon are compelling, and now confirmed by public health advice in other countries. What will it cost in lives and businesses for Ireland to wait for more proof, particularly when fresh air is free?

The HSE is soon to employ 500 contact-tracers to track future Covid-19 patients, asking where they went and who they met. But, how many people are employed to look at our houses and buildings to prevent tens of thousands of people becoming infected in the first place?

Escalation of this pandemic is not inevitable. Science-based rules, targeted public health advice, risk assessments and enforcement are critical now, not loose rules of thumb.

There is little cost in moving outside, spreading out into safer rooms, avoiding crowds, re-setting ventilation systems, and opening windows.

Orla Hegarty is assistant professor at the School of Architecture UCD