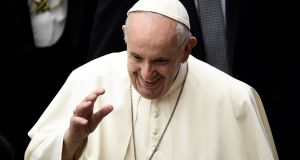 Pope Francis in the Vatican this week. “We sorely need an impetus, a guiding star to bring us back to what the Vatican Council was attempting to do, a conversation between the church and the world. Pope Francis is trying to get that process going.” Photograph: Filippo Monteforte/AFP via Getty Images

Tomorrow marks another significant moment in history. On October 11th, 1962, the Second Vatican Council was formally opened by Pope John XXIII. It lasted three years and was closed by Pope Paul VI on December 8th, 1965.

It was summoned to address the relationship between the Catholic Church and the modern world. It attempted to heal divisions and make the Word of God and those who serve it more accessible and more real for all people of goodwill. During the council meetings and in the years immediately succeeding it, an atmosphere of great hope and enthusiasm was evident. It had many offshoots, including liberation theology, especially in the Latin American church. That coincided with the end of the conflict in Vietnam, when the youthful enthusiasm of young idealistic people helped turn US public opinion against the war. The end of the conflict opened up new horizons, as people could dream new dreams of propriety and goodness in international relations.

Last Saturday there were scaled-down celebrations in Potsdam to mark the 30th anniversary of German unity. It was a low-key event because of Covid-19. In itself the peaceful unification of Germany has been successful. However, the fall of the Berlin Wall was in many ways a marker in time that points to the development of an unease in the world. The demise of the Soviet Union and the collapse of east-west frontiers has brought about new tensions.

Right now the world seems on edge with itself. We are all children of our own specific generation. And from the end of the second World War until soon after the fall of the Berlin Wall, at least in the developed world, no matter how depressed things were, there were always those who offered a hope and an enthusiasm that seemed attractive and possible.

In tomorrow’s Gospel, Matthew (22: 1-14) tells the story of a king who throws a banquet for his son’s wedding. What happens? No one wants to come to it and those who eventually arrive are dressed in a disrespectful way. What seems a great occasion, an event that turns all eyes to the future, ends up in turmoil and disarray. Is that simply the way of the world? Is it the state that we find ourselves in right now?

The Vatican Council tried to lift the church by its bootstraps into the modern world. It was an attempt at dusting down old tawdry habits and restoring the Word of God into the exciting and compelling message that it originally contained. As always happens, some mistakes were made. But just like what’s happening right across the world, it seems right now that the church is in a tired place. This affords great opportunities to fanatical views of all shapes and sizes. Battalions of people have walked away. In the developed world, fine young priests left ministry in the 1970s and 1980s, men who would have much wisdom to offer the church as priests today.

Listening to the rhetoric of Donald Trump and his followers, his call to make America great again, his refusal to disassociate himself from far-right white supremacist groups and how he appeals to evangelical and conservative Christians, I keep thinking that the world seems to be tired and there’s no one about who will carry the baton of the aspirations of the Vatican Council.

We have come such a long way from the Vatican Council. We sorely need an impetus, a guiding star to bring us back to what the Vatican Council was attempting to do, a conversation between the church and the world. Pope Francis is trying to get that process going. And between the churches, there is urgent need for open and real conversation. Right now the world needs us all to start talking to each other in love and truth.

But I think we can be heartened. In the first reading (Isaiah 25: 6-9) in tomorrow’s liturgy the prophet Isaiah assures us that the, “Lord of hosts will prepare for all people a banquet of rich food, a banquet of fine wines of food rich and juicy, of fine strained wines.”

People always talk to each other at banquets. Let’s all try some pleasant talking.